Managing director and global head of securities services at UniCredit 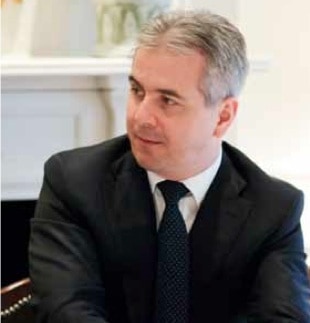 Amazingly, he has done most of this piloting in one landlocked market, Hungary, and, even more astonishingly, at one organization. He started in 1990 at Budapest Bank and never left. Of course, the exceptionally competitive Central and Eastern European region has not been immune to the consolidation across the global and sub-custody industries. Budapest Bank was replaced by Bank Austria, which was taken over by HypoVereinsbank (HVB), which itself was superceded by UniCredit.

“Yes,” he remembers saying, “[I] don’t know too much about securities services, but it sounds exciting.” J.P. Morgan was hired as an external adviser for a year, and Szalay-Berzeviczy learned as he went. “I was spending half my day actually signing the back of the stocks,” he says. “That was how we were endorsing the shares because the Hungarian Stock Exchange was a physical one.”

The central securities depository (CSD) began operating in 1993, and over time settlement times sped up, with T+5 dropping to T+3. In the early 1990s, Telex was still widely used, and mobile phones hardly existed, says Szalay-Berzeviczy. “We still had typewriters. These things all disappeared, along with physical securities, thank God,” he says. “We’d send [someone] to the central depository with the physical shares and hope they’d not get robbed.”

Szalay-Berzeviczy also was deeply involved in the country’s market infrastructure, oscillating between his role as head of custody for HVB in Hungary and chairman of the Budapest Stock Exchange until 2008.

When Budapest Bank was rolled into Bank Austria, not a single client was lost, says Szalay-Berzeviczy. Bank Austria opened its securities services businesses one by one in the region, with Kazakhstan as the last addition. As UniCredit supplanted the institutions that had come before it, the bank grew to be a major provider in Central and Eastern Europe, with 22 total markets under its purview. Szalay-Berzeviczy sees Central and Eastern Europe as “an emerging region with huge growth potential.” He says: “Especially after the crisis, we expect this region to be back on track, outperforming Western Europe again.”

The region is also very exciting and dynamic, with some countries part of both the EU and the Eurozone, some members of the EU but not the Eurozone, and some nations still applying for EU membership. In contrast with some if its rivals, UniCredit has a different structural organization. All of its securities services units handle sales and relationship management as well as operations, which makes the bank more efficient, Szalay-Berzeviczy says. “We can react more quickly, in a more flexible way with this operating model,” he says.

This model was under more than just the usual pressures for the last 5 years. The whole Central and Eastern European sub-custody operation of UniCredit was dogged with rumors of its imminent sale by its Italian parent company since around 2006 – when they sold its Italian domestic securities services business to Societe Generale Securities Services (SGSS) and its German custody business to CACEIS in 2007.

Indeed, there was a concentrated, but ultimately fruitless, sale process in 2009, which prompted the sub-custody leadership to decamp to rival Deutsche Bank. But UniCredit responded robustly, appointing Szalay-Berzeviczy as managing director and global head of securities services at the bank, reporting to Marco Bolgiani, the former Citibanker who heads the global transaction banking division at UniCredit (see “UniCredit does a U-turn,” Global Custodian, Summer 2009).

In what could not have been an easy task, Szalay-Berzeviczy has done a remarkable job in stabilizing the staff and keeping the clients since then, including hiring John Gubert, formerly of HSBC, as a senior adviser. So it is with no amount of irony that Szalay-Berzeviczy is the first to say that no one in the industry can tell what the future will hold, but he is quick to follow up that UniCredit has a plan. Central and Eastern Europe are its core markets, where the focus is, as ever, increasing market share – and there is always room for improvement.

“We have markets where we can still grow, such as Russia, which is our focus right now,” Szalay-Berzeviczy. “As far as global securities is concerned, our goal is to consolidate market leadership in Central Europe. Now the focus is on serving the domestic client in the international market.”