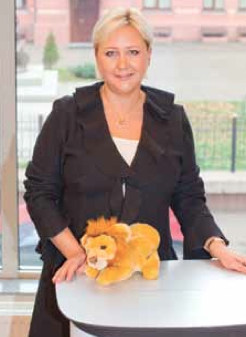 Natasha Sidorova never expected to work in a bank. In fact, the only thing she was sure of was that her fluency in English would be an attractive selling point to potential employers in her native Russia. Bouncing from job to job doing translation, interpretation and teaching English at the start of her working career, she decided to – in her words – “settle down a little bit and do something more permanent.”

Then something interesting happened. The more she learned about banking, and securities services specifically, the more she developed an interest in what was then just in its infancy in Russia. “Quite soon I realized there was one area in the bank which was of particular interest, which was custody,” she says. ING had just begun offering custody, the first to do so in the country. “Soon, I realized all my dreams were around that.”

Indeed, they were. Her boss hesitantly allowed her to transfer from her supporting role to become a relationship manager in ING’s securities services group; as it would turn out, she would go on to become one of the pioneers of Russian custody and later head of the country’s first securities services business.

“It was a new method at the time,” Sidorova says of custody in Russia in those days. “No one knew how to do it. It was basically replicating some things from the customer service area or cash management department. No regulations or documents on custody activity existed at that time. We had to learn from our more experienced Western colleagues or from the clients themselves. Looking at the initial RFPs, they are not the ones that I would complete now, but that was the time we were all learning.”

Things are quite different today. Fifteen years after ING launched its custody business in the country, quite a number of custodians are now operating in Russia, with Sidorova’s ING business topping the Global Custodian Agent Banks in Emerging Markets Survey among leading clients. As head of securities services for ING in Russia, Sidorova oversees a number of front and middle office departments within the bank, including client relationship, product development, business development and sales. And, tellingly, the first three clients Sidorova signed up back in 1995 are still with the custodian today.

It took 2 years from the time ING launched its custody business for Russia to begin licensing and regulating custodians. “When it started, it was more about the ethics and psychology of client relationship rather than about the theory of the business,” Sidorova says. The 1997 piece of legislation that regulated custodians has not been updated since. Now that custody is a business entrenched in the financial services landscape of Russia, Sidorova and other major custodians with international origin are pushing together to reform the country’s regulatory infrastructure. That has become a key part of her role. In addition to her day-to-day responsibilities (which never quite go as planned, she says, something she nonetheless considers one of the perks of her role), much of her career has entailed working with industry bodies to help develop not only ING’s custody business but the infrastructural and regulatory environments in Russia as well. She also liaises with other local custodians to discuss best practice and client needs, she says.

The greatest need in the Russian securities industry, Sidorova says, is eliminating the fragmented market infrastructure, which in particular would entail the creation of a central securities depository. The National Settlement Depository, where Sidorova serves on the board of directors, is seen as the natural candidate to take on the title. She also actively engages with NDC and MICEX Committees, the Depository Clearing Company of Russia, self-regulating organizations NAUFOR and NFA as well as ROSSWIFT.

What was it that initially attracted her to the custody world? Simple: Avoiding the tedium of other banking jobs, she says. “I thought it was about permanent change, no routine,” Sidorova says. “To me, accounting or working for a tech department is something really boring. I felt immediately that custody is not like that.” From the looks of her CV, that initial judgment must have been spot on.

Sidorova says the most demanding – yet rewarding – clients, which should be no surprise to sub-custodians around the world, are the global custodians. “What my colleagues know and appreciate is, once you manage to serve a global custodian, you can serve any client in the world,” she says. “Sometimes tough network managers ask non-standard questions. That is what makes life interesting.” –Christopher Gohlke