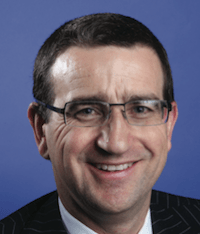 Campbell Pryde lives with a window of about 30 minutes in front of him. This is hardly surprising given his work at XBRL in automating and bringing standardized financial information to a fragmented corporate actions industry.

XBRL has become synonymous with corporate actions reform in the U.S. and claims the key to overhauling the system is to engage issuers in the process. Before becoming CEO of XBRL U.S., Pryde led the company’s U.S. Labs efforts that developed the corporate actions taxonomy upon which the strategy is based. “We started to get 10-K and 10-Q reporting information available in a standardized format, so it made sense to extend the information beyond scheduled reports like a 10-K or 10-Q to real-time data reported as part of a corporate action event,” he says.

Fittingly, Pryde began his career at Morgan Stanley’s equity research team, where he worked until 2008. He recalls: “The SEC was trying to roll out XBRL for 10-Ks and 10-Qs. At the same time our equity research team was collecting data from analysts, but it was expensive to get, so we had been proponents of getting XBRL rolled out and did lots of work trying to get that promoted.”

XBRL then approached Pryde to provide a perspective on the data investors might need. “We always had problems with corporate actions at Morgan Stanley, and as these problems arose we wanted to try to address that,” he says. “A number of folks from DTCC had approached us at the time asking how they could use XBRL to solve the fragmentation issue. At Morgan Stanley too, I wondered if there was a way to collect a lot of this prospectus information in XBRL format, particularly because the DTCC wanted to capture that information early for their master security files.”

Key to XBRL’s strategy is that any data that the investor is going to receive as part of the investment decision and managing the security portfolio from a traditional investment analysis perspective is applicable to corporate actions. “Investors need the data in an electronic format so they can efficiently evaluate information coming to market and make appropriate decisions,” says Pryde. “There’s a bunch of these events that come under the generic heading of corporate actions, and one of the things we set to do with the help of SWIFT and the DTCC was to bring it all together in a way that could be processed automatically.

The XBRL community had already gone a long way to getting companies to create XBRL documents. Every single public company needs to use an XBRL document to do their tax filings with the SEC or with Companies House in the U.K. for example. “So the idea was to piggyback on this movement,” says Pryde.

However, in the absence of a regulatory mandate, XBRL decided to build things in the U.S. from the ground up. “We approached the banks that had issued ADR (American Depositary Receipt) securities in the U.S. to start publishing corporate action events for all of the securities issues in an XBRL format and use that as a basis to report to the DTCC in the U.S.,” says Pryde. “So we basically produced the taxonomy for corporate actions. It was initially based on the 20022 standards and the internal data standards that the DTCC used.”

Today XBRL captures all information that is reported about the corporate action on the basis that different users care about this information and may use it for purposes beyond settlement and maintaining reference data. “The corporate actions message from an XBRL perspective is trying to be a lot broader,” says Pryde. “You can take that message and turn it into an ISO20022 message, but it also has tax information and can be used for tax purposes. Traders also used it for trading purposes.”

Citi and BNY Mellon were the first banks to jump on board by reporting their information to the DTCC in XBRL format. They would process the information and send it on as an ISO20022 message down the chain. FINRA, the regulator for the OTC market, is also looking to collect corporate actions data in a standardized XBRL format from the banks as they publish it.

Previously, banks were spending huge amounts of time entering corporate actions information for all the ADRs into the FINRA website. “Now those XBRL messages can go to FINRA as well as the DTCC and minimize the rekeying effort,” says Pryde.

The take up of XBRL by the DTCC and the regulator is just the tip of the iceberg. The company is currently working with other over-the-counter markets that are also interested in this data. “If they can get this data from FINRA instead of the banks, they are going to whack two days off the time it takes them to get this corporate action,” says Pryde. “So it’s making the market more efficient. The data aggregators also want this information.

“Everyone wants to get the data as close to what is being sent from the issuer. As soon as the banks announce the event, every participant would like to get it automatically as quickly from the source as possible. This eliminates the need to go to an intermediary to get it. So the idea that we can further push this back up the chain the better, as it reduces work for everyone and cuts down the chances of errors occurring.”

Pushing as much data back to the issuer as possible also meant those issuers, as well as the DTCC and the regulators, did not have to re-enter it manually. “That data can be made available not only to DTCC, but to FINRA, OTC markets, mutual funds, brokerage houses and whoever it may be, because it only has to be entered once,” says Pryde. “As it stands today, any corporate action is probably entered 20 different times to multiple different systems. It’s just a huge waste of time and money for everyone.”

XBRL, which currently targets ADRs and stock dividends, has plans to expand the format across every type of corporate action. “There’s about 30 or 60 of these things we’ve identified, not only in the U.S. market, but globally,” says Pryde. “XBRL is a global organization, but obviously we’re getting interest from different countries, so we will try to roll them out as little pilots, get the taxonomy in place, get the snowballs rolling.”

While Pryde has made strides in standardizing information in corporate actions, he says the initiative has barely begun. “We’re going to try get the easy stuff done in the markets that want to do it,” he says. “We’re trying to make this a global initiative and role it out globally. XBRL has jurisdictions in about 30 countries around the world so we have a large network that would like to see this happen globally. This is truly a collaborative effort that requires that we have to concentrate on getting all the pieces available so they are there and ready to go when the multitude of players in the corporate actions world are ready to move forward in their specific industry or jurisdiction. So I’m not a legend yet! If we solve this then that would be truly legendary.”