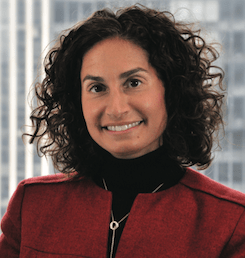 When Emily Portney joined J.P. Morgan’s futures and options clearing business in 1993, immediately after her college graduation, she was not sure she wanted to be on Wall Street forever. But 21 years later, she finds herself the global head of a business not far away from the one in which she started.

Portney spent her early years learning the ins and outs of clearing while navigating a turbulent decade on Wall Street. In 2001, Portney was approached to join the firm’s equities business, ascending through its ranks to become that group’s CFO. Not long after, she added coverage for prime services to her portfolio.

Two years ago, Portney was appointed head of all futures and options. She says that her hiring indicated a different approach from the way most business heads were named. “Historically speaking, people who ultimately run businesses have come from sales or trading,” says Portney. “My CFO experience was useful given the increased emphasis on capital and liquidity requirements under Basel III, as well as the fact that I’ve been in the clearing industry for a while. It was gratifying to be trusted to lead our F&O team.”

In mid-2012, Portney was asked to lead the newly created ACCE (Agency Clearing, Collateral Management and Execution) business. ACCE includes all client clearing across securities and derivatives, as well as the firm’s collateral management business. Both areas represent a major growth opportunity for J.P. Morgan, given the pace and scope of regulatory change in the pre- and post-trade space. “The landscape in which we and our clients operate is changing dramatically. ACCE, and our Investor Services group more broadly, is designed to help our clients be prepared and gives them the tools and expertise they need to execute in the new environment,” says Portney.

A prime example of this growth is in OTC clearing. J.P. Morgan has already built a top-tier OTC clearing franchise in the U.S., and Portney expects significant growth when mandatory central clearing comes into play in the latter part of 2014 in Europe and eventually in Asia. “We’ve invested significant time and capital in building out our clearing franchise,” says Portney. “It’s already thriving in the U.S., and the foundation is built and ready for the acceleration in volumes in Europe and Asia once OTC clearing is mandated there.”

The other leg of ACCE is the firm’s collateral management business, which has seen further growth as the new collateral requirements take effect. Collateral Central, which J.P. Morgan launched in 2013, allows clients to manage and optimize their collateral portfolio regardless of their custodian, counterparty or type of transaction. Clients can track their assets, manage margin and take advantage of proprietary algorithms and analytics in real time.

“Companies are in the new position of having to post initial margin on many more types of transactions than ever before,” says Portney. “Collateral management has moved from what was an operational consideration in the past to a front-office decision today. It’s a key part of the portfolio management process.”

While there are opportunities for ACCE to expand and flourish in the new regulatory environment, the business is also grappling with potential unintended consequences.

“While we are trying to build a safer system, we don’t yet know what the unintended consequences of all these new rules are,” says Portney. “I hope that regulators—as well as ourselves—are flexible and amenable to tweaking things along the way, should it be necessary.”