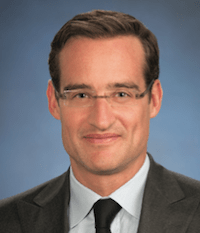 When John Levene studied economics and political history at the University of Manchester in England, he didn’t envision himself working in finance. He wanted a broad degree where he could pursue a range of careers, perhaps related to marketing, advertising or public relations. But his first job out of school was with Hambros Bank in London (which has since been acquired by Société Générale), where he was a graduate trainee in their corporate finance department. “And I went down that path just because I thought it would be good to get educated on business and how businesses and banks work,” says Levene. “And here I am 23 years later still in the finance sector.”

Following his time at Hambros, Levene went to Salomon Brothers selling European emerging equities into the U.S., which caused him to move to New York. Shortly after, Goldman Sachs reached out to him because they wanted to get into the emerging equities business, so in 1998, Levene changed firms.

At Goldman, Levene transitioned from working with emerging markets to developed markets, which sparked his involvement with hedge funds. At the time, says Levene, Goldman had a fast-growing prime brokerage business, which piqued his interest. And with his background of managing relationships from his sales positions, moving into prime brokerage sales was a good fit.

“What I was able to bring was relationship management skills,” he says. “Our business in prime brokerage was pretty developed in 2002, but we had a relatively small sales team, and all the focus of the sales team was to procure and acquire new clients onto the platform. And what I was able to bring, which they had an element of but perhaps not as developed, was managing relationships—existing relationships and trying to build and grow their market share. I think that skill set I had from the research sales side was helpful, and we evolved over time and ultimately brought more people with my background into the prime brokerage sales team.”

During his time leading the group, Goldman enjoyed top status in the prime brokerage industry, but the financial crisis presented a serious challenge, particularly as hedge funds started to move away from the single-prime relationship into the multi-prime model. Despite these challenges, the firm remains the largest prime broker in the world.

“We were able, I think, to maintain a strong face in the eye of the storm,” says Levene. “…while perhaps your instinct at times in moments of stress is to sort of hide, we took the reverse approach here, and we made ourselves very available. And I think that helped us. And I think we were very open with clients, and if clients did want to diversify, that was something that we would execute on very quickly. And at the same time people wanted to diversify into us as well, so we were open and available for new business during that period.”

Despite the trials of the crisis, Levene shows no signs of weariness and says he truly enjoys his role. “One, we get to talk to people who I think are on the cutting edge of what’s going on in markets,” he says. “Two, we get to work with a lot of new funds and new organizations that are being created, and it’s just fun and exciting to be working with people launching new businesses…and three, look, at the end of the day it’s about the people you work with, and we have a phenomenal team here at Goldman Sachs.”