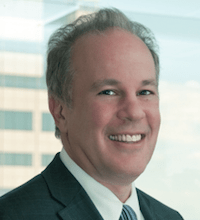 Mark Jennis always had an interest in finance, technology, operations and global initiatives. So when Jennis had the opportunity to join DTCC last year to lead the group’s collateral program, he jumped at the offer, knowing that it was the perfect intersection of everything he had worked on up to that point.

Jennis’ path wasn’t always so clear though. After graduating with an economics degree from Brandeis University outside of Boston, he wasn’t sure exactly how to get involved in finance, so he became a consultant at Arthur Andersen. One of his earliest consulting roles turned out to be with J.P. Morgan, “and that’s when I really felt that [finance] was the industry that I wanted to be involved in,” says Jennis.

In the early years of his career, as a consultant and later working directly for Citibank and Morgan Stanley, Jennis worked on operations and building systems, skills he developed from his time at New York University getting his MBA in computers and information systems, as well as a minor in finance.

After Morgan Stanley, Jennis moved on to Bankers Trust where he had his first chance to work on a collateral program. A major part of their business was in risk management and derivatives, says Jennis, “and because that was key, collateral infrastructure was required.”

Jennis was one of the first employees at Bankers Trust to work on collateral management, and he took a global approach, which included a stint living in London to set up the infrastructure there, as well as traveling to Asia in order to expand the firm’s collateral footprint. His work also involved cross-product collateralization, such as with foreign exchange—something that is becoming more common today, but Jennis was doing this in the late 1990s.

Following Bankers Trust, Jennis went back to Morgan Stanley; the firm realized it needed a collateral infrastructure program, so they recruited Jennis to build it. During his time there, Jennis served as head of collateral in the Americas, working on margining for derivatives, prime brokerage and for the retail sector. He then became global head of collateral and gained further exposure to other areas of margining such as futures and options, after the head of operations, Michael Bodson, who now serves as president and CEO of DTCC, extended Jennis’ remit to run collateral and global listed derivatives and commodities operations.

During the 2000s, Jennis took on several different roles at Morgan Stanley including serving as the global head of prime brokerage operations (which he describes as a collateral business at its core), and following the crisis, he moved on to focus on risk management in the areas of information security and technology risk.

“But I missed being in the [collateral] space because I had spent an awful lot of my time in my career for that. So Mike [Bodson] and I spoke, and he said that he was interested in someone who would run the collateral program for DTCC. And I saw that as a huge opportunity to be able to take everything that I learned over my career and apply that for the industry.”

“What was great about the Margin Transit piece was it was everything I worked on throughout my career in derivatives to be able to come up with a streamlined process and make it global and make it support many different constituents. And so I couldn’t be in a more exciting place given all that background.”

Jennis also speaks of his “keen desire to reduce risk,” and he hopes that his time at DTCC can serve a purpose greater than himself.

“What we’re trying to do is reduce the amount of systemic risk that’s there, having lived through a lot of [crises], and that’s one of the pieces that really drives me wanting to be in the role.”