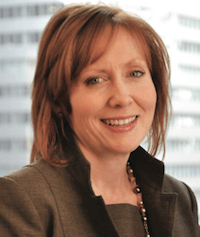 While the financial crisis certainly caused plenty of hardships, 2008 turned out to be a turning point for Teresa Heitsenrether and J.P. Morgan’s prime brokerage business.

From an early age, Heitsenrether held an interest in finance, which was enhanced by her father working for the Commodities Futures Trading Commission (CFTC). After growing up in New York, she stayed in the area to attend Fordham University majoring in finance and later earned her MBA in finance from New York University’s Stern School of Business. “Being pragmatic at the time, it seemed like a good option to be gainfully employed,” she says.

Sure enough, a summer internship with J.P. Morgan after college launched her 25-year career with the firm—a company where she not only has spent her entire career but also where she met her husband.

In 1987, she started off in product areas including global funding and liquidity management, fixed income sales, repo financing and global custody, and she later moved on to the firm’s treasury department. Heitsenrether then made the transition to serving as global co-head of the firm’s fixed income prime brokerage group, providing credit intermediation and financing of fixed income securities, foreign exchange, credit derivatives and interest rate derivatives to hedge funds.

Yet prior to the firm’s acquisition of Bear Stearns, J.P. Morgan had limited scale in prime brokerage, particularly regarding equities. As Heitsenrether explains, she focused on the macro fixed income side of prime brokerage because J.P. Morgan was only able to delve into the equity side following the repeal of Glass-Steagall in 1999. And while the firm did build up this portion of the business, prime brokerage was the one area still lacking an equities presence.

But when the financial industry was facing collapse, J.P. Morgan acquired Bear Stearns at the government’s request, which provided the firm immediately with a large presence in the equity prime brokerage space.

“It was really the seminal event in growing the business,” says Heitsenrether. “Despite strange circumstances of how we came together, the fit was enormously synergistic.”

“London has a slightly different feel, only because we’re newer in the region in the prime brokerage space,” she says. “So the team has a very entrepreneurial spirit, and it’s a team that’s come together with professionals from lots of different firms over the last few years, so there’s definitely an espirit de corps and a shared mission in terms of what we’re trying to accomplish in the region.”

Then, 18 months ago, Heitsenrether came back to New York as global head of prime brokerage.

“The focus from there was making sure we rounded out all the international capabilities so we could truly compete with the global leaders in the space,” she says. “So that’s where we’ve been investing significant amounts in both technology and people so that we can round out our presence and capabilities in Europe and Asia, which we’ve done over the last five years.”

So because of her previous efforts abroad and because of the successful integration of Bear Stearns, the global in Heitsenrether’s title rings true.