What was your introduction to the prime brokerage industry?

I graduated NYU in 1984, which was at a time when anyone could make NYU. Now you need amazing grades to get in, but when I went to NYU business school, if you had a pulse you could get in.

After graduation, I was living in the basement of the family house in Rockaway Park, Queens. My parents told me to get a job, so after 30 interviews I finally got one. The day I interviewed is the day I began, 21 May 1984. I missed college graduation three days later because I thought I would lose my job if I took a day off. 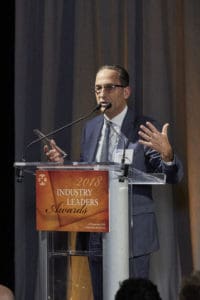 I did key punch for $16,500 plus overtime, plus $5 cash meal money for dinner expense of the previous night. And to this day I can out-type the admins! But with my head down and a humble sense of ‘I can’t believe I’m working on Wall Street for Morgan Stanley’, I took that entry level position and went on the ride of a lifetime. That’s why, when I received the Global Custodian Lifetime Achievement Award, I spoke about blessings. I define the word blessed.

So I keypunched away with my head down and then six months later, I was asked if I wanted to go into the ‘cage’, dealing with government clearance and settlement. I didn’t know what that was, but I took it. When mobility knocks, whether you asked for it or the firm asks you to do it, you answer the door and say thank you. Next thing I know, they needed a supervisor and it is still only 1984 the same year I began. The career just progressed from there.

Of course, you also need luck. I was good enough to stay in operations for eight years and learn a trade. You can’t be of value to the firm or to a client if you don’t know much, so the product, technical skills and mobility across so many disciplines gave me the ability to become a problem solver. No place better to start then is in the boiler room before looking for the promised land.

Mobility came knocking again with the firm having a need for a global role based in NYC for their Global Custody business in the early 90s. I did that for three years, learned the global markets, nuances, regulations etc and those were great years post my time in operations. Getting a bit older and wiser I did question to myself how we can keep up with the competition who had scale and lower fees while our assets and expenses were moving in the wrong direction. I decided that for once I was going to look for mobility and not wait. A few months later, I ended up in prime brokerage (PB) in a relationship manager role in client service. Crazy, but six months after moving into PB, Morgan Stanley sold our custody business to JPMorgan Chase. As I said, sometimes it’s not enough just to be good, but you also need to be lucky. I truly am not sure where my career would have gone if I’d remained in custody and was part of the sale.

How big was the prime brokerage business at that stage?

I think we had less than 40 employees in prime brokerage when I joined. Hedge funds were never in the papers nor did many in our firm even know what we did. We were located in downtown Brooklyn by the courts; we weren’t part of much other than something called Morgan Stanley Services. When I joined in the mid-90s Rich Portogallo ran prime brokerage. Once again luck is as important as talent and me having him not just as our senior person, but as my mentor through the decades is a gift that keeps giving. Rich early in his PB career realised how critical it is to cover every touchpoint at a hedge fund from the investment to the non-investment side, build trust with all, problem solve, treat all with fairness and dignity and then good will come our way. Results are in the numbers. He was and is right with that approach. Pre- and post-crisis his way is the only way I know. Goodness prevails always. 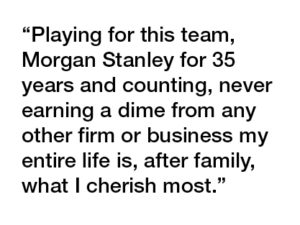 I’ve been in prime brokerage ever since. Our ingredient for success is, everything matters, don’t lose sight of anybody because they’re going to turn up somewhere else down the line and always maintain a solid name. Millennials today are all about the quantity of their network which is important. They want to be touching everybody and everything. But as one gets older the key to the game is taking quantity to quality and then getting a mentor – or tops two – to lead you through all that awaits.

Since joining the prime brokerage business, has it been a linear career progression or were there any times you thought, ‘I’m not sure about this’?

Never. What I realised is, it’s not always going to be a ladder. Sometimes I need to climb across the monkey bars before I can go up the next ladder. Derek Jeter played for one team his entire career and when asked what his biggest accomplishment was, he said that was it was being a “lifer”, a Yankee his whole career. He too started in the minors, sat on the bench and wasn’t always the starting shortstop hitting leadoff. I can relate but believe me, playing for this team, Morgan Stanley for 35 years and counting, never earning a dime from any other firm or business my entire life is, after family, what I cherish most. It’s beautiful and defines blessings one more time. 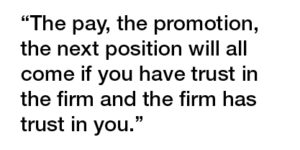 Rich Portogallo taught me early on in my prime brokerage career as I was given more responsibilities and promotions that it is critical not to take yourself too seriously and to be thick-skinned. Now sometimes I am sarcastic, I like to laugh and have fun, but I also realise people are going to take shots all day long and you have to handle it as well as you give it. You’re not going to bat 1000 with everybody out there. Not everyone is a Gerry Rubin Fan Club member, I get it. But overall, I’d say if you engage with all people at all levels with respect and fairness, return the call regardless of who the person is and what title they have, it’s a beautiful game we get to play.

When you’re mentoring people, what have you personally introduced rather than passed on?

I’ve introduced a bit more as the years go on, because I’ve seen the change in the skills and mind set of the next generation. They have a skill set far superior to what I came out with, but they have more of a ‘now what’s next” mentality. So one thing I teach is career and life patience. It might not all happen on your timetable, but if you just slow it down and learn something completely before wanting the next move, it’s going to pay off.

I’m not saying everyone’s going to be a lifer, but why not try hard to be one knowing how awesome it is for those who have accomplished such. The pay, the promotion, the next position will all come if you have trust in the firm and the firm has trust in you. Timing is not something we all get to determine, but patience for those who are willing to trust and are performing will be rewarded in due time at Morgan Stanley. I am proof of that. So I guess I am trying to introduce to those I mentor that it’s critical to put your own agenda second to the firm’s needs and what makes most sense. Duration like I have is only because my agenda takes a back seat more times than not to the master plan whether I understand that or not.

If you look at the industry when you started, look at it now and look at where you think it’s going to be in five years’ time, how significantly is that landscape changing?

That’s a good question. I do believe that the human interaction, building trust, covering a client, making them feel good, being responsive, building up camaraderie – creating a team culture that we have at Morgan Stanley Prime Brokerage will stand the test of time. What has changed is the complexity. That small start-up with five people can launch and outsource all non-investments to third parties or can launch on a platform instead. With platforms come many if not hundreds of employees. It’s harder to engage with the main decision makers and all contacts, but I go back to my first point: if you’re just good to all people, it’s going to work out in the end. 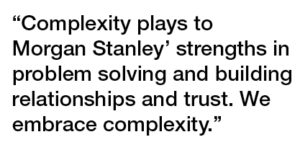 There are more challenges. The reliance on a PB used to be for technology; now fund administrators and vendors may take the lead in that discipline. But being holistic is not just a word; we live it as our culture.

It’s far from easy. Giving a client the right amount of financing, consulting, capital intro, advisory, capital markets resources as an example is critical to our approach regardless of where the revenue is being booked. Transparency and a bespoke approach to every client on our platform is the norm. Our name recognition is critical to us, so we can’t lose sight of anyone. Yes, challenging to do across the globe and disciplines, but so rewarding when we get it right as we have post the crisis. At the end of the day, complexity plays to Morgan Stanley’ strengths in problem solving and building relationships and trust. We embrace complexity.

Finally, who other than yourself would you say is responsible for where you are today?

The one person in my life that made the biggest impact and is the reason I am here is my dad, my hero. Mom gave me the work ethic and drive and my dad gave me my name, what I stand for as a human being. He was all about family, goodness, honesty, integrity, fairness with a smile. I have lots to do to just to be in the same league as my dad and will never accomplish all he did but I will die trying. He was a wonderful husband, son, dad, brother, marine, garment centre worker who never went to college nor earned a six-digit income but accomplished more than I ever will in my own life. He was all I want to be.

So at day’s end, though it’s far from over, I would say Rich Portogallo from my professional career and my dad are most responsible for where I am today. Now If I can end with one last point – and it’s critical – is what is the true secret sauce. The true recipe for success is the biggest decision you make in life, which is who you will spend your life with as your soul mate. More important than being a 35-year lifer at Morgan Stanley I am about to celebrate 30 years with my angel, Joyce. The three children she raised and having her as my wife is the true secret to being happy, successful and one blessed, lucky man. I win!