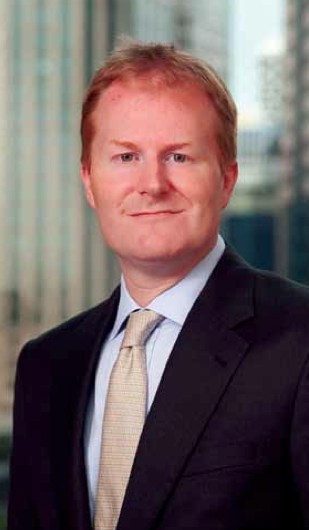 Like many ambitious students, Giles Elliott went into university knowing he wanted to go into the banking industry, but he did not take the standard approach of studying business or finance in undergraduate school. Instead, Elliott, now the global product head of investors and intermediaries at Standard Chartered Bank, majored in geography.

“The recurring theme from people in the industry was that it was more important that I did something that I enjoyed and that was analytical without necessarily having to specialize in banking,” he says.

While other leaders in the industry were crunching numbers, molding their paths to success in the business world, Elliott was specializing in fluvial geomorphology, which literally means the study of water on the land, at the University of Hull in the UK. But Elliott believes there is a relevance between geography and the securities services industry.

“We spent a lot of time really trying to explain how features evolve, taking data readings, analyzing results and really drawing a set of conclusions,” he says. “In a funny enough way, it was very good training for some of the work that you do in product management and strategic planning.”

Following his time at Hull, Elliott, who traveled with his parents and often lived abroad, took a year off with a plan to travel the world and get some work experience before settling down. In 1986, he ended up taking a “holiday job” of sorts with Chase Manhattan’s global custody business in London.

Elliott went on to spend ten years with J.P. Morgan Chase, the first half of which was spent in Europe doing network management just after the Iron Curtain had effectively fallen.

“It was a very interesting time to be in that role because the key client focus was opening up the new markets in Eastern Europe and really developing them in terms of ensuring that they had infrastructure regulations to enable foreign investment,” he says. “It was great because it gave me insight into some of the top fund managers who were trying to invest into these markets as well as access to heads of exchanges and regulators who really saw us as being the link to encourage foreign investment. So I think a lot of my passion for markets and really what it actually took to facilitate investment into markets came through that.”

His passion for new and underlying markets has helped Elliott see much of the world, maintaining another passion of his – travel. He’s always been “internationally focused and oriented,” but his interest in travel seemed to increase the more he did it.

After some time in London and Asia with J.P. Morgan, the company moved him to Australia, where he moved from network management to running custody operations for almost four years.

“It was a very good insight because I think product managers often don’t really understand what it takes for services and products to be delivered – they can be too conceptual,” Elliott says. “And that gave me an appreciation of how to overcome the challenges to deliver consistent and customized solutions across different clients. It also helped me understand what it takes to supply a product. This has translated into what I do here at Standard Chartered where we’re running operations in over 30 markets to cover various products.”

In 2004, Elliott moved from J.P. Morgan to HSBC after expressing a desire to move back into Asia after much time in Australia.

“I think the challenges and the disciplines to achieve consistency across a very broad network just bring a different set of skills and approaches to the fore,” he says. “And when we reflect on the kind of markets we cover they have a very diverse set of infrastructures and regulations. And yet the branding goal is to achieve consistency. Certainly I think the time at HSBC gave me some very valuable insights into the kind of challenges that are included in operating that kind of franchise.”

Now, at Standard Chartered for the past four years, Elliott and his team are focused on understanding emerging buyer needs and getting a leg up on the competition to position themselves with the right competitive product capability for those particular needs.

“My role really covers looking at our business strategy, the product agenda, the product investment agenda, our competitive positioning and our proposition within that,” he says. “A lot of my focus at the moment looks at how we make sure that we maximize the leverage of our footprint. Our primary focus is really Asia, Africa and the Middle East. The focus of my time is in making sure that we have the right propositions for our target clients who are either resident in our footprint, investing locally or globally, or located overseas and wanting to invest into our footprint.”

Of all of the places Elliott has been (he has spent a lot of time in Asia, the US, Australia and New Zealand), he says Beijing was probably his favorite place he has visited.

“I think really the highlight for me at the time was going into Beijing 24 years ago and before it opened up to tourism and international business,” Elliott says. “There were really very, very few international travelers at that point. Everyone rode around on bicycles – probably the most different place that I had been to on my travels due to this lack of western exposure.”

Though Beijing was his top spot to be a tourist, Elliott has taken a keen interest in the African markets while at Standard Chartered Bank. Last year, SCB purchased the African sub-custody business of Barclays (see “Consolidation in Africa,” Global Custodian, Summer 2010).

“Africa’s at a very interesting stage of its evolution where it is trying to replace the traditional aid channels and bank lending with direct and portfolio investment. A key part of the story at the moment is the role that banks can play to help facilitate foreign investment to get the companies access to the capital that will enable the kind of growth that we’re all predicting in that continent,” he says.

Nowadays Elliott’s ability to travel is right at his disposal. In his time working and residing in Australia, Elliott, who now lives in Singapore, received his pilot’s license.

“Sadly it’s something that I’ve really put on hold since arriving in Singapore,” he says. “The tropical air and the frequency of thunderstorms doesn’t make flying a small plane the safest activity in this region, so I’ve had to hang my goggles up for a period of time.”

Whether he is in or out of the office, Elliott is a big believer that every role brings about a different set of challenges and learning opportunities. Each of the roles he has held in the past has led him to a different major accomplishment.

“I think the biggest thing that I’m really proud of is the shift in business strategy that we’ve done at Standard Chartered,” he says. “More recently the whole process behind looking at the strategy for expanding into Africa and buying the business from Barclays was driven by our views of what was going to happen on the continent and why we thought that was important for our own agenda.”

Despite having a demanding career, Elliott always makes time for his family, whom he credits for being very supportive of the traveling lifestyle he maintains.

His children, now 10 and 12, were born in Hong Kong, and much like their globetrotting father, they maintain active hobbies as well. Elliott’s son is a go-kart racer in the Asia Karting Championships and his daughter has taken up horseback riding in Malaysia. Though it takes up much of his weekends and time away from work, Elliott says he wouldn’t trade his time with his family for anything.

Elliott’s love for the water didn’t end upon completion of his geography degree either. He now resides on a boat, waking up to the water every morning. With his family, he parks along different islands off Singapore, continuing his passion for travel as well.

“I love the water,” he says. “I think if you really look at the water it can be both soothing and quite intimidating at the same time. The one thing I love about water is that you have to respect its unpredictability.”