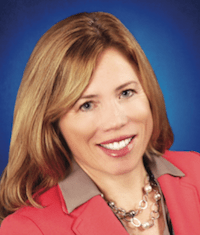 Christine Egan’s hedge funds career has taken the circuitous route, working for large and small professional employers in the finance and accounting industry. “It was certainly not by design but there was a marriage of that core accounting CPA track followed immediately by a more finance oriented role at a large global asset management firm, which in hindsight was very powerful,” she says.

Egan’s inroads into Kaufman Rossin Fund Services (KRFS) came when she sold the firm an investment management software product for the credit portfolios they were watching over. “That was about 15 years ago,” she recalls. “I met the directors of the firm and we became good friends and that’s how it all came together, even though I was not to work with them for another 8 years.”

Egan started working in the firm’s fund administration business in 2006, culminating in her running sales for the organization. Christine has been involved in helping to transform KRFS into a firm that provides the resources of a powerhouse with a high touch delivery model. “I’ve had different vantage points in my career, from the “Big Eight” accounting experience to the front office side in prime brokerage as well as the technology angle. I’ve seen all these different pipes feeding into the hedge fund industry which has given me the ability to make deep connections with clients and prospects.”

“It’s been validating to experience many years of strong growth at KRFS…it is clear that managers and investors are not necessarily looking for the biggest administrator but are looking for quality throughout their whole administration experience. Our firm is truly the definition of organic growth – it is internally funded and not laden with debt or external financing.

Egan says the independence factor has helped KRFS immensely. “Independence is what we’re selling,” she says. “We’re not part of a larger bank or investment firm that has some trading element involved. We stick to our core as a third-party administrator and we live by that mantra. No third party marketing, no sitting on clients boards….we are not fans of conflict. Our pitch to clients is very similar to our mantra: focus on what you do well and we will independently provide the vital support services.”

Equally important in growing KRFS into a high-touch administrator with $24 billion in assets under administration is being close to where the clients are, says Egan. The firm has offices in New York, and full service centers in Miami (which is where it spun out of accounting firm Kaufman Rossin & Co. about 20 years ago) Boston, Dallas and San Francisco.  “We were marketing in Boston where there is a large alternatives-oriented asset management community and we realized that being there would allow us to add more value,” says Egan. “That was 6 years ago and it has been an “if you build it, they will come” scenario.”

As the number of independent third party fund administrators declines, driven by regulations that add to clients’ costs pressures, KRFS looks set to remain independent, says Egan. “I feel several of the mergers of late among the smaller players have been forced out of necessity. Some of the recent mergers have also been about the original founders getting paid out and moving on. At KRFS we are an anomaly. We don’t have debt and we don’t have private equity ownership. Nor do we want that. We have the resources and the freedom to focus on a tailored approach to solutions. “We want to continue to be the anomaly in the industry and to grow as one of the largest of the private administrators.”

KRFS has been growing at over 20% per year. This says, Egan, is about having control over a business that puts its clients first.

Geographically, the administrator will develop stronger links with Latin America. “We don’t have a presence there yet but through our Miami office it really is a gateway to Latin America,” says Egan. “Last year’s Global Custodian rating in Latin America really helped our visibility and we have received many more inquiries which doubled our fund numbers in Latam. It seems to me some of the asset management firms in Brazil do a wonderful job of fund raising in the U.S. It’s definitely something I have been watching.”

Aside from the growth opportunities, Egan reiterates the alignment of her values with those of KRFS as one of the building blocks for success. “I love KRFS because our philosophies are right on,” she says. “They are a very philanthropic group and I’m a very philanthropic person.” Indeed, at the time of going to press, Egan was preparing for the New York marathon and raised a lot of money for charity, including contributions from the firm. She also sits on the board of The Coalition Against Child Abuse and Neglect (CCAN) and is an active member of the 100 Women in Hedge Funds association. “I’m trying to live my own values and there’s a real fit with the firm,” says Egan. “I can’t imagine a better environment. With the growth of the firm I will do my best to support our employees and help with their professional growth. I feel a strong commitment to women in this industry as does my firm.”