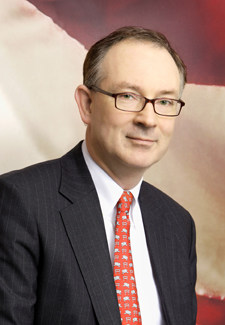 As the son of an officer in the Royal Navy, Geoff Cook passed almost all of his school days at boarding schools in England, re-joining his family during the holidays. His time at school exposed him to a variety of cultures from an early age. Cook returned to the place of his birth, the Black Isle in the remote north of Scotland, while he completed a two-year accounting qualification at college in nearby Inverness. It led to a job with the local office of an Edinburgh-based accounting firm called Scott Oswald (now part of the Tenon Group) where he qualified as a Scottish chartered accountant in 1988. “To a large extent, it shaped how I think today,” says Cook. “My philosophy is still that of a Scottish chartered accountant. I am cautious, and thoughtful about how to grow the organization, but not afraid to seize the opportunities in the marketplace.”

That cautious optimism was never more sorely tested than in 2008-09. The mutual fund industry was experiencing month after month of net redemptions, but the forensic Scottish attention to cost applied by Cook meant that the revenue squeeze showed up at BBH Luxembourg in productivity gains, not in redundancies, just as it had in the previous downturn of 2000-03. As Cook recognizes, the Scottish love of making economies – or, on a more positive note, of never wasting a good crisis – melds admirably well with the BBH way of doing business when times are hard. “Our culture, which stems from the partnership, is very important to us,” he explains. “We are still, in many respects, a large family, and want to make sure we look after our employees appropriately. We have always tried to do that at BBH, and I hope that people who work with us would agree that we have succeeded thus far.”

Ironically, Cook was not a Scottish chartered accountant for long. He joined Price Waterhouse in London as soon as he qualified, staying with the firm for ten years, always in its various financial services practices. The job took him to New York and, crucially, Luxembourg. Though he began as an auditor, by the time he joined Brown Brothers Harriman in 1997, Cook was providing consulting services to fund managers and administrators. Though BBH was not a client, at that time it needed a second resident managing director in Luxembourg to meet a new regulatory demand from the Commission de Surveillance du Secteur Financier, and they found the ideal solution in Geoff Cook. “I had been in Luxembourg with Price Waterhouse, and I liked the idea of moving back,” explains Cook. “Having done several stints in London and New York, I felt ready to go back to Luxembourg, where the quality of life is high, it is a great place to raise a family, and I have a lot of friends.”

Enough friends and family, as it turns out, for Cook to have spent the past 15 years at BBH, running the Luxembourg office either as part of a duumvirate of managing directors or (until recently) the lead managing director. That status dated back to 2002. In 2005, he also became global head of fund administration for BBH, taking charge of all of its fund accounting and transfer agency operations around the world. By then, Cook was able to pass day-to-day operational responsibilities to several senior colleagues. In fact, BBH Luxembourg now sports no less than four locally resident managing directors – Jean-Marc Crepin, Henri Hackenberg, Joe Hendry and Gert Rautenberg – with combined responsibility for more than 450 staff.

That may be twice as many managing directors as when Cook started 15 years ago, but also is nearly seven times as many staff. Assets under administration have grown even faster. In fact, they have grown 40-fold, from less than $10 billion in 1997 to more than $400 billion today. “Obviously, the marketplace has grown in that period, but we have grown with it,” says Cook. “In fact, we have outpaced the growth of the market.” The fact that BBH won the mandate to service $50 billion of assets on behalf of ING Asset Management in 2010 shows how far the Luxembourg office had come in the years since fellow legend Susan Livingston ran it with just 20 people in the early 1990s. Far enough, in fact, for Geoff Cook to be given much of the credit for the success. He became a partner at BBH in January 2009, and in 2011 became partner responsible for Global Relationship Management and Business Development, sitting in Luxembourg.

The secret of that burgeoning corporate and personal success has been a focus on growing with existing clients, rather than adding new clients willy-nilly. “We have preferred to maintain our focus on a limited book of clients, which we feel has a high capacity to grow and which we can do more with,” says Cook. “This is very much the philosophy of BBH as a whole, and BBH Luxembourg is not only in tune with that philosophy, but it also is a key part of it.” He rejects the notion that this makes BBH conservative, arguing that a solid foundation in a massive and well-regulated international fund administration center has created the scope to experiment with new types of client, fund and service. “The cross-border UCITS business is some of the most complex fund business that we transact at BBH globally,” says Cook. He also points to the fact that BBH has developed a sizable alternative fund administration franchise on behalf of real estate and synthetic funds.

“Global” is a glib term at many financial institutions, but at BBH it is a claim with substance. BBH is the only custodian to earn more than half of its revenues outside of the United States, and there are now more Investor Services partners based outside than inside the mother country. “The leadership of the organization is changing, in terms of its geographical balance and its geographical view,” says Cook. “It has been an evolution rather than a revolution, but there is a conscious process at work. Over the next ten years, the largest proportion of growth will probably be in Asia. Culturally, the way we operate as well as think is much more globalized in terms of practical delivery of the services. We now operate a global service model. Ten years ago, BBH Luxembourg was the manufacturer as well as the command-and-control center of our global fund administration operations. Today, Luxembourg is still the command-and-control center, but the manufacturing capability is much more evenly spread across the globe.”

Cook embodies this emerging global personality, and not only because he is the global head of a global business. “Look at me,” he says. “I am British, but have lived outside the United Kingdom for the majority of my life. My wife is American, and my children attend a French-speaking school where they learn German as well. Inevitably, that has shaped the way that I think.” Cook not only sports a global biography and a cosmopolitan family. He runs a global business and resides in a global fund administration center that has turned Luxembourg-domiciled and Luxembourg-administered UCITS funds into a globally recognized brand, not least in Asia, the Middle East and Latin America. Being at the head of many of the most global of all operations at BBH, and living and working for the last decade and half in a global financial center, puts Geoff Cook in a good position to judge what BBH might sacrifice as well as what it might gain from globalization. “We are of a larger size, but we are still not overly large,” he explains. “Decisions can still be executed relatively quickly and in a transparent manner. The culture at BBH is still that of a closely managed business where the client comes first, and the quality of service to the client is equally important. So, while some things are changing, other things remain constant.”