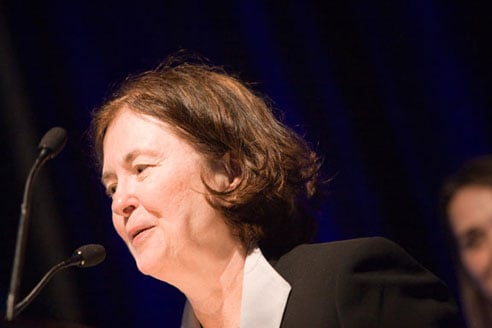 Mary Ann Callahan, managing director, global relations & development, is responsible for DTCC’s strategic relationships with other market infrastructures globally and represents DTCC in a number of global industry initiatives.  She also was recently reelected as president of the Americas’ Central Securities Depositories Association (ACSDA) for 25 depositories and in North, Central and South America, the Caribbean, Bermuda and South Africa.

In the mid-1990s, she was first noted by Global Custodian as its “CSD Personality of the Year,” a role she continues to thrive in. “Our clearing and depository infrastructures have continued to prove our value and solidarity with the industry in good times and bad. We are uniquely positioned to offer collective, efficient and risk-managed tools to our members and issuers.”

Callahan recounts how she arrived at her present position:

My own career took a global turn back in the mid-1980s with a briefing I did for several Tokyo Stock Exchange guests, at a time when the Canadian Depository first opened its first accounts in the US, and when we were working on our first outbound links to the London Stock Exchange’s settlement system just before Big Bang. The ensuing years have led to another dozen or so CSD links, as well as memoranda of understanding with another 11 CSDs, mainly in Asia, and a host of global initiatives and friendships.

In this role, I have certainly enjoyed the travel and meeting with colleagues all over the world, including a wonderful ex-pat experience when DTCC assigned me from 1998-2002 as head of our first London office near Lloyds of London-and I even lived in the City of London, in the Barbican arts complex.  It was a time of amazing changes in UK and European market infrastructures, as the euro arrived and CSDs began merging and re-creating themselves as for-profit IPOs.

Of course, concurrently, our own DTCC was reinventing itself as a new portfolio of U.S., and before long, increasingly global market infrastructures. Speaking of Legends, I’ve been fortunate to work for and learn so much from U.S. market infrastructure leaders, including Jack Nelson, Dave Kelly, John Kinnaman, Rick Myers, Bill Jaenike, Dennis Dirks, Jill Considine and Don Donahue.

It’s been equally an honor and a pleasure to participate in ACSDA since 2003. I deeply value the friendship and achievements of my ACSDA colleagues, individually and collectively. I’m proud that ACSDA reflects our region’s energy and dynamic growth, most of all through our conferences twice a year. ACSDA also collaborates globally with other CSD groups, most recently at CSD10 in Budapest (a homecoming of sorts, because in the early 1990s, I had a wonderful chance to work with the Hungarian team that created KELER) and at International Securities Services Association (ISSA); the Association of Global Custodians and Thomas Murray; Hague and Unidroit Conventions; SWIFT and SIBOS, The World Bank, CPSS-IOSCO, and the regional and worldwide stock exchange federations, among others.