Home > Does one size fit all?

However important it may be, market infrastructure is not usually seen as the main driver of investment. Rather, it is a necessary foundation. 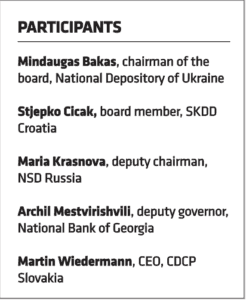 Mindaugas Bakas: We should actually look at what we mean by infrastructure. It’s not just cables, computers and systems. It’s a lot wider. First of all, legislation should be seen as part of the infrastructure. Market practices are also part of it and these are under continuous development. It’s not simply a case of building an infrastructure once and then it’s ready.

GC: From your experience, what is the practical impact of a CSD on market activity?

Archil Mestvirishvili: I have to say that since we introduced our new market infrastructure, the securities market has grown from zero to 7% of GDP. For bonds in particular, in the Georgian market, efficient infrastructure is important. As a small market, we still need to have similar safety and user friendliness as other markets with a sound post-trade infrastructure. Without that, it’s hard to attract liquidity to the market. Fees also need to be competitive. In Georgia, we took a similar approach to Target2-Securities.  We created one integrated system, bringing together a government CSD for treasuries and a private CSD for corporate bonds and equities under one IT solution owned and operated by the central bank. We provide IT infrastructure, services and business continuity for the corporate CSD while fully preserving its legal and business independence.

Stjepko Cicak: Surprisingly, I partially agree with what was said on the previous panel about market infrastructure not being a driver. We are a utility. Let’s compare ourselves with the water supply. If the water is clear and runs sufficiently, everything is fine. If it isn’t, nothing is fine. But having clean, running water isn’t going to enlarge the spend on water. We are just the foundation for growth.

We must be efficient, of course. As Archil says, this can be a challenge for smaller markets. The costs of regulatory compliance, for example, are the same for all markets. Our challenge is to meet these regulatory requirements in a timely manner.

Martin Wiedermann: I agree. Infrastructure is not the main driver for expansion of the capital market, but without the infrastructure, the market is not able to expand. I’d describe CSDs as a backbone of the capital market. But their main role, in my opinion, is to create trust between investors and issuers by maintaining the integrity of the securities issues.

Maria Krasnova: I believe that both sides of this argument are right. I’ve worked for NSD since 2001, so I’ve had quite an extensive period to observe market dynamics. I remember very well the time before 2012 when the CSD was established. I remember long arguments with representatives of the Association of Global Custodians (AGC) who I was trying to persuade that NSD should be recognised as an eligible securities depository for American funds to keep their assets with. They were saying that there was no centralised infrastructure and even though organizations like ours were well developed technologically with quite a well-established legal framework, we couldn’t be recognised as an eligible securities depository unless there was a CSD law in the country. Once the CSD law was adopted in November 2012, the AGC recognised NSD as an eligible securities depository.

As a result of this decision, assets under custody increased rapidly. Also, alongside the adoption of the CSD law came recognition of the concept of foreign nominee holders. After this, international investors in Russian government debt rose from 4% to 24% of the total. A record was reached in 2017, when 33% of government debt on our books was in the accounts of foreign nominees.

That said, NSD is not just the CSD; it’s also the second largest payment system in the country after the Central Bank of Russia. We have a limited banking licence and perform both cash and securities settlements. We provide all kinds of settlement services, including DVP in commercial bank money and central bank money. We have developed collateral management services and a trade repository.

My argument is in line with what Mindaugas says. We developed quite an extensive range of services over a short period of time and therefore we accumulated not just expertise in technologies, but also a high degree of trust in the market. This now gives us an opportunity to promote further changes from which, not just international investors but also domestic investors, including retail investors, may benefit. As an example, we have an electronic voting platform that allows investors to vote remotely, which, given the size of Russia, is very useful.

Is there a way of developing a CSD to fit the size of the market or should you be planning for something bigger? After all, you don’t want to support a huge fixed cost when there isn’t the volume going through. Is there some consensus on what the minimum job of a CSD is?

Stjepko Cicak: Does one size fit all? Generally, no, but from a regulatory perspective, yes, of course. In becoming compliant with CSDR, it doesn’t matter whether you are Clearstream or the Croatian CSD. And that’s not an easy task, so it’s important for the smaller CSDs to be as cost effective as possible. 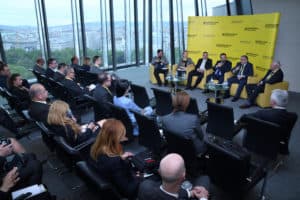 GC: Maria, does not being part of the European union make a difference to the regulatory burden?

Maria Krasnova: We are free from some requirements. For example, we combine a depository and banking licence, which is not really a popular idea in Europe now. However, once we become part of the international securities settlement network, we have to comply with certain sets of rules. We are also affected by the decisions that our European services providers make. A little more than 10% of our securities portfolio consists of international ISINS. We get services from upstream institutions, ICSDs in particular, and whatever service standards they apply affect us, of course. We have to apply the same rules to our clients. There is also the CSDR rule about 3rd country CSDs, which we are for a number of European CSDs.

Mindaugas Bakas: I think there are three things that need to be taken into consideration in planning for a CSD: one, and maybe most important, is scalability. When you’re building for a small market, to save cost, you should select a system architecture that’s easily scalable. In Ukraine we purchased a relatively inexpensive system and are running a project with internal resources and minimal functionality, because there is no current need for a fully-fledged CSD functionality in the Ukrainian market.

GC: Did you buy an off-the-shelf system?

Mindaugas Bakas: Yes, but with a little customisation. We know the full capacity of the system. Right now, we’re offering to become the infrastructure for all the pension accounts, which total around nine million. We know that the new system can handle this. The second thing obviously is the flexibility of the legislation. Without that flexibility you can’t react in a timely manner. Third and very important is to think of the whole environment and not just the CSD itself. You have to understand the market context to be able to plan ahead.

GC: Archil, as the only central banker on the panel, how does it look from your perspective?

Archil Mestvirishvili: We agree that a CSD is necessary, but on its own is not sufficient without a proper legislative environment. The CSD solution that we implemented last year supports all necessary functions for the entire Georgian market. The implementation cost was pretty modest and it capitalises on the infrastructure and human capacity already present at NBG. Issue process, redemptions and other corporate actions are fully automatic. You cannot vote through the CSD yet, but it provides other functions such as an automatic pledge for the smooth settlement of securities. In Georgia, the CSD is important for monetary policy as well. We take corporate bonds, which are kept in the private CSD, as collateral for monetary operations, with a haircut.

GC: Does securities lending exist in your markets? Is it legislated for, is it centralised? How does it happen, if it happens?

Maria Krasnova: We have no securities lending service per se yet, because there is a lack of proper legal instruments. However, the repo market is very well developed both on-exchange and OTC, including repo with central counterparty and repo with general collateral certificates – a special kind of security issued by the CCP specifically for collateralisation of transactions. As for OTC repo, NSD performs the function of collateral management provider and its services are well developed.

Martin Wiedermann: The situation on the Slovak market is quite similar. However, there is no centralised lending institution in Slovakia, though the OTC market as such works well.

Stjepko Cicak: Repo and securities lending are done OTC by banks. We’ve had a look at introducing a centralised solution, but there was no real interest from the retail side. We have not given up, but have postponed this development for a later phase.

Mindaugas Bakas: A centralised mechanism is really, really complicated. We’d been trying to build one in the NASDAQ Baltic countries for close to 10 years and it’s not that easy. It actually touches on a lot of sensitive ownership and realisation issues that require specific legislation in each country.

GC: Is there a kind of ownership of CSDs that you think is best to promote the trust of investors?

Martin Wiedermann: From my viewpoint, the optimal solution is a combination of private sector management with government engagement at a supervisory board level.

Stjepko Cicak: I’ve been in the markets for 15 years and I haven’t really seen trust in CSDs as an issue from a market perspective. We are highly regulated in every country. We are closely watched. It’s a matter of timing. When you have to spend a lot on regulatory compliance, it’s hard to explain to private investors that they need to put in more capital with no expected increase in revenues, simply for the purposes of harmonisation. It’s easier if you have government stakeholders on your side in that situation. If, on the other hand, it’s a highly profitable business, you don’t need government involvement.