Global Custodian awarded its covered Lifetime Achievement award to DTCC’s president and CEO, Mike Bodson, last night for his significant contribution to the post-trade industry during a career spanning over 34 years. 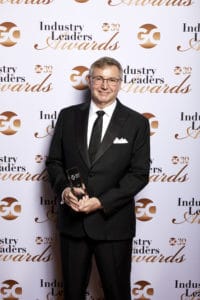 Reflecting on his time in the industry, Bodson told Global Custodian one of the primary reasons that attracted him to the industry was its continuous evolution.

“The people you work with, along with the complexity of the industry, make it both challenging and exciting. I have never had a boring time in my career,” he said.

Bodson took on the role of CEO in 2012, following the retirement of Donald Donahue, one of the principal figures who led the clean-up of Wall Street following the collapse of Lehman Brothers in 2008.

Prior to taking on the top role, he was DTCC’s chief operating officer where he was responsible for all IT and operations, and oversaw its Deriv/SERV and EuroCCP businesses.

Before joining DTCC in 2007, he spent over 20 years at Morgan Stanley in several senior roles, including head of the institutional, retail and asset management operations department. He also spent time in Tokyo and Hong Kong as head of finance, administration and operations.

Bodson explained he was able to lean on the example his predecessor sent when dealing with a potential crisis on his very first day as CEO, when futures broker Knight Capital Group suffered a computer glitch resulting in a loss of $440 million in 30 minutes.

“When you are in this position where you have to provide leadership, it forces you to learn humility. The best way to lead is to let others do their jobs and for me to help remove obstacles,” Bodson recalled.

“The entire team did extraordinary work, and while having to manage a major crisis on my first day could have been unsettling, being surrounded by such outstanding people helped the firm and me successfully handle the issue.”

In the seven years Bodson has served as president and CEO, one of his primary goals has been ensuring the clearing and settlement house is prepared for whatever the future may bring.

“I am not sure what DTCC will look like in the future, but we will remain a critical part of the global markets, even as the emergence of new technologies – be it cloud, DLT, AI, or quantum computing – will change the fabric of financial processing,” Bodson added.

“My responsibility is to position us to take advantage of these dynamics to best serve our clients and the industry.”

Some of his notable work leading the DTCC includes establishing governance principles for distributed ledger technology (DLT), as well as using the technology for its credit derivatives processing facility.  He also oversaw its acquisition of Omgeo, and established the GlobalCollateral joint venture with Euroclear.