Miller pipped other shortlisted candidates – Northern Trust’s head of front-office solutions, Melanie Pickett, and BNY Mellon’s, head of digital, Roman Regelman – to the honour, which was voted for by attendees on the night.

The award capped off a big night for Intertrust in which the company picked up three awards, including One to Watch: Fund Administration, and an innovation award in recognition for the recently-acquired Viteos business. 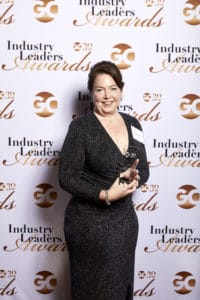 “It’s a huge honour to have been awarded the Global Custodian North American Industry Person of the Year 2019 and I’m delighted to accept this on behalf of all our hard working, focused and driven employees across the globe,” said Miller.

In September 2018, Miller, outlined an ambitious three-year strategy with a vision for the firm to become a globally renowned tech-enabled corporate and fund solutions provider, and she has wasted no time in achieving this goal.

Under Miller’s guidance, Intertrust announced this summer it would acquire Viteos, a tech-enabled provider of middle and back-office services, in a deal worth $330 million, bolstering its technology capabilities and reputation through the well-received agreement. In February, Intertrust also reached an agreement to purchase ABN AMRO’s escrow and settlement business.

These moves followed a swathe of regional expansions from Intertrust which saw new offices open in Ireland, Paris and China, along with an extension of its services in the US. The Viteos acquisition will also enable Intertrust to leverage the technology provider’s offshore centres of excellence in India.

These plays seem to have resonated with those in the industry, as talent appears to be pouring into Intertrust. During 2019, Miller managed to lure BlackRock’s director of investment accounting operations, Deirdre Hochma, to the team, along with Citi’s Patrick O’Brien who became its global head of funds in May and Ian Lynch, the former global head of alternative fund services at BNP Paribas.

In a space where consolidation is rife, those who plan to survive are focusing on technology enhancements and a wide-range of offerings with extensive global expertise and people on the ground in as many markets as possible.

Miller’s growth aspirations for Intertrust may be seen as ambitious, but they are clear: to be technology-enabled and focused, with acquisitions and expertise additions to achieve scale. The first 12 months of her three-year plan have left few doubting her ability to reach this goal, and this was reflected in the vote on the evening.