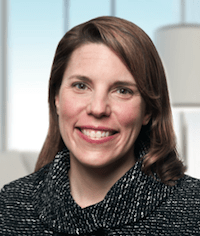 A great teacher can have an impact for life—something Christine Waldron knows first hand.

After growing up in tiny Mukwonago, Wisconsin, Waldron went to Marquette University in Milwaukee to study accounting. Naturally, she envisioned becoming a partner at a public accountant, but that changed when a professor of hers introduced her to a friend of his, Bill Corneliuson, who opened her eyes to the world of investing. When Waldron graduated in 1993, she joined Corneliuson’s family office/hedge fund, B.C. Holdings, handling the fund’s middle and back office.

Following her time at B.C. Holdings, Waldron went on to work at KPMG for a few years in the company’s assurance practice before going to U.S. Bancorp, where she has been for the past 15 years.

“When we launched the business here at U.S. Bancorp on the fund administration side, it was definitely a grassroots effort,” says Waldron. “So I went to Bill and I said, ‘What I think you need is an independent administrator, and you need to be my first client.’ And he agreed.”

To this day, Waldron’s team continues to service this fund, and she has transformed the business from a startup to one of the top players in the industry.

“And that success has been attributable to the people above, below and around me every day,” she says. “I’m really a firm believer that that’s been the most notable change since starting the business, which is really building up our ongoing commitment to our staff to really build out our operations.”

From her time at B.C. Holdings, Waldron learned the importance of having a diverse business background and an understanding of the different components of a company. “When you’re in a four-person office, you do everything from handling the backup tapes on the system to watering the plants,” she says.

Now, due to the changing regulatory environment, Waldron says that the role of fund administrator has extended beyond accounting. “It’s certainly changing the skill set of the actual administrator,” she says. Whereas before the administrator’s role was focused on producing NAVs and investor statements, there is now more of a legal/compliance role, and Waldron tries to apply the diverse experience she gained at B.C. Holdings.

“If I was just narrowly focused on making sure my accounts had clean books and records and not understanding their legal needs, their regulatory reporting needs, their technology needs, their marketing needs, I would be doing them a great disservice.”

Because she led the development of this division of U.S. Bancorp’s administration from the beginning, Waldron has first-hand experience working in these various areas, even as they apply to her own company’s needs. “Not many heads of $60+ billion administrators can say that they installed their own systems,” she says.

And even though she’s been in the industry for nearly two decades, Waldron still carries the same excitement she had when her accounting professor introduced her to Corneliuson.

“I love what I do. I love the people that I work with. And I love our clients. So it makes it really easy for me to come in every day.”