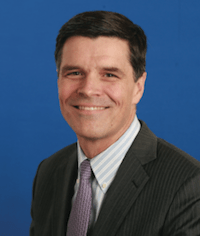 From capital markets to securities services, Lee Waite’s experience directed his vision and leadership of Citi’s global direct custody and clearing network—at 61 markets, the largest of any custodian.

He entered the bank after graduating from the Fuqua School of Business at Duke University in 1983 and began working with Citi’s brokerage predecessor, EF Hutton. The 23 years he spent in capital markets with Citi were a good fit for what the bank does on the transaction services side, says Waite. “However, while operations and technology are a ‘bi-product’ of the main capital markets businesses, clearly it is this operational and technological expertise that our clients purchase from transactional services [that] is the business,” says Waite.

The last job Waite had in capital markets was as chief operating officer of the equities division. His remit covered technology with a focus on value for money for that technology. “The second important area was middle office and how efficient we were at clearing and settling those trades,” he says. “Third was—‘Are we in control and setting up the proper control functions around the globe?’ All three of these areas—technology, efficiency and controls—are the cornerstone of running a transaction services franchise,” says Waite.

“All three dovetail directly into the transaction services business. The way I think about it is exactly the same. It’s simply looking at the same transactional flows but from the other end of the telescope. Instead of looking down the telescope you’re standing at the other end looking back up. And clients are increasingly interested in us looking further up that tube.”

Waite describes his move from capital markets into transaction services as one of his greatest learning experiences. His journey into transaction services came with Citi’s acquisition of Bisys in 2007. He was asked to look at the investment services division of Bisys from a capital markets perspective, which was interested in expanding in broker-dealer and investor services. “As we were doing the due diligence, it was a case of what might the purchase of that business do for us over on the capital markets side of the fence,” he says. “Then, when it became obvious that we were going to purchase the business, Neeraj Sahai, head of Securities and Fund Services, asked if I would consider moving from the capital markets business to the securities services fund business to help integrate Bisys into the firm.” 18 months after helping to integrate Bisys into Securities and Fund Services, Waite ended up taking over the direct custody and clearing (DCC) business for intermediaries.

Given Citi’s indigenous standing in many markets across the world, Waite’s vision for DCC was clear. “This legacy business has been in many markets for many years. So if you think about the transaction services business, having that longevity in these markets and the relationships with all of the participants in these markets—whether it’s with the regulatory bodies, the government, the stock exchanges, the CCPs or the central bank—those are all incredibly valuable and long-tendered relationships to have when you start thinking about the various transactional services businesses and particularly the direct custody business we have in those locations. So in some ways I was fortunate to inherit a legacy business that was well run and well regarded for a long period of time.

“So it’s about strengthening that vision. It’s being able to expand around the globe and making sure we are capable of offering the full suite of services, whether it’s an account operating model on the clearing side or third-party clearing where those sorts or services are allowed, that we have those capabilities and we have a full suite of capabilities for clients. As a global business with processes and procedures we manage globally, there is a lot of thought around what we do regionally and making sure what we’re doing in Europe is appropriate for Europe, as it might be different to the Middle East or Asia for example.”

As part of Citi’s acquisition of ING Securities Services in the Central and Eastern European region, the bank will open in its 62nd market, Bulgaria, at the end of the first quarter of 2014. “The philosophy is not to open markets just for the sake of it,” says Waite. “We need to think about how we’re doing it and whether it is going to be commercially viable at the end of the day. We take a cue from our clients and make a decision on whether it makes sense from a strategic perspective and whether that new branch can stand on its own two feet in a reasonably short period of time.

“To some degree, global clients’ buying behavior tends to be regional in nature, so if you have an incomplete footprint in a given region, it makes it difficult for clients to select you in that region. They don’t necessarily exhibit that buying behavior in Asia and Western Europe. Part of our thought process might be regional footprints as to where we might consider opening up offices.”

The evolving regulatory landscape is expected to cause Citi to expand its DCC footprint event further. “As an example, there might be markets which wind up becoming part of the T2S infrastructure that we would need to open,” says Waite. “Finland and Denmark are going to become part of T2S. We don’t have an offering there today so one of the considerations would be to open in these two countries to be part of our T2S offering. This is an example of how a structural change may shape our global footprint.”

Waite shares his experience of expanding the DCC franchise: “It is not that difficult to open a market,” he says. “We have a team that is an expert in this space, we have a global platform that we utilize, Citi is always resident in the country in question, and therefore we have the infrastructure we need in place locally. Of course we do need to research and make sure we comply with all local rules and regulations. The more difficult decision to make is should we close a market. We’re loathe to do that because clients come to depend on us, so we have a philosophy where we want to be very thoughtful about the markets we close and open.”

Waite singles out South Africa as a memorable market opening for Citi. “We had a lot of dialogue with the regulators,” he says. “They were very complimentary about our process and procedure, the methodology we employed in opening and they were excited to bring in a global player that helps bring up everyone’s game in the market place.”

Looking forward, Waite says it is unclear where his Citi career will take him, but at some point it will make sense to hand over the reigns of DCC. With his 23 years of experience in capital markets and seven on the transaction services side, his plan is to utilize that experience fully in whatever that next role might be.