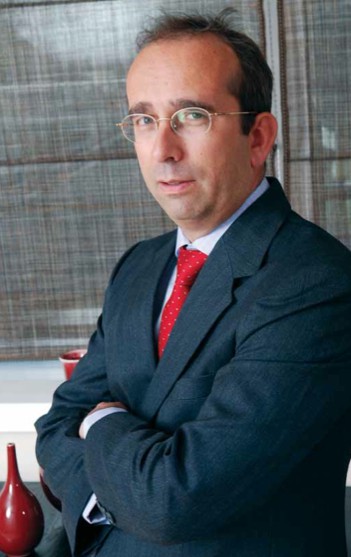 With two years left at the Solvay Business School, Olivier Storme already had his sights set high. He set up a service program that allowed companies in Belgium to hire student trainees, and when Banque Indosuez Belgium asked him if he had students who could work for them, he had just the person in mind – himself.

It was there that Storme met his mentor, Patrick Zurstrassen, who he says inspired him to pursue a career in the banking industry. Storme went on to finish his degree at Solvay, and later contacted Zurstrassen, who had been sent to Luxembourg, to see if he could pick up where he’d left off.

“He told me, ‘Yes, I have a job for you,’ and so I decided to go there without knowing what my future job would be, but because I was so motivated by that person I decided to join,” Storme says. “I had never been to Luxembourg before, and I had no idea what Luxembourg was like, but that’s how I started without asking myself if the banking arena was my favorite subject – I followed someone.”

The Belgium native was hired as a management assistant for the financial engineering department at Banque Indosuez Luxembourg in 1988. He has since worked his way up – throughout the company’s name changes – and is now the head of international affiliates coordination for CACEIS Investor Services.

In 1994, while the company was known as Credit Agricole Indosuez Luxembourg, Storme helped bring the asset management tool Cloning to life. Cloning, the first product of its kind, let its users manage several funds with the same investment strategy as if it were a single pool of assets.

“Thanks to that product we gained legitimacy in the business,” Storme says. “I was in charge of the product, but I was not alone, and we had a great team here working on it with me, and we gained many deals thanks to that.”

Storme’s keen innovation has played a large part in his career. In 1998, when Credit Agricole joined forces with Fortis to create Fastnet Europe, things really began to take off.

Storme’s team mentality helped him down the road as well. From 2006 until 2010, he led a group of 50 staff members as the head of business development at CACEIS, which he says was one of the most exciting parts of his career thus far. The company saw large numbers of new mandates from 2007 to 2010, and though Storme was the head of his department, he credits his teammates for the success.

With ups and downs along the way, Storme’s career has been a nonstop roller coaster ride of activity, but he says he’d take that over stoppage any day. For instance, Storme says that although the recent crisis has been a struggle, it has kept him busy as opposed to being at a standstill.

Now, Storme says, there has been an explosion globally in terms of the size of the industry over the past 15-20 years.

“In terms of service providers, we need to have the appropriate resources and staff able to understand sophisticated products, so if we compare our business today to ten years ago, we have seen that in terms of complexity of the distribution and the complexity of the products in the portfolios it is much higher than it was years ago.”

But because of the recent financial crisis, there are more and more regulations for funds. From UCITS IV, AIFMD and MiFID in Europe to Dodd-Frank and FACTA in the US, regulations are forcing markets to disclose more information and monitor investors in a better way, Storme says.

The self-motivated Solvay alumnus has a proven passion for funds and banking. But his passions run deeper than the business world. While his career takes up most of his time, Storme says he makes time for golf. He also enjoys tennis and sailing, but he says there’s just something special about the camaraderie of golf.

“It’s probably the most beautiful sport because it’s a sport that you can play with other people of different levels, whereas in tennis if you are playing with someone who is not at your level, it’s a nightmare,” he says. “The other advantage of that sport is it’s probably the only sport you can play with your clients or partners, and it’s a way to get to know them better because you see how they behave, and you spend five or six hours together if you include the lunch or dinner afterwards. There is something magic in golf, like in hunting I think.”

Dedicated to his hobbies just as he is to his career, Storme hits the golf course by 7 a.m. to take some swings, working toward becoming a better golfer. But he’s always at the office by 9 a.m.