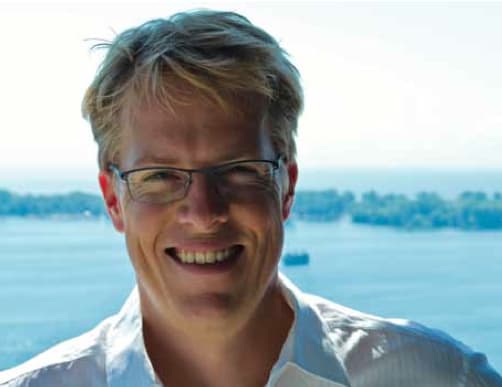 Moritz Ostwald is no stranger to starting from scratch. In fact, he’s got a knack for it.

Ostwald spent a decade in the banking and securities services industry, chiefly at BHFBANK in Germany resurrecting the bank’s dormant custody business with fellow Legend Cornelia Keth, thus earning his legendary status. But this could very well be a “Where are they now?” exercise as Ostwald has since left the industry – or “taken a break” as he puts it – to pursue his own entrepreneurial ideas.

In early 2011, he relocated to Toronto and co-founded Suxxess Village, a multisensory mobile learning platform for success-related topics. He says the concept of the product is to get adults excited about learning again.

“Apparently, as adults, most of us lost the interest and/or no longer have time to explore the world how we would like to,” he says. “So we focus on bringing the excitement to adult learning again, similar to how we felt as a kid.”

The product will come in multiple formats including high-quality audio, video and e-book lessons and vary in length from five, ten or 15 minutes. He and his partner hope to attract seed money and launch the product in 2012.

While the new business doesn’t fall under the umbrella of custody, Ostwald is able to draw on his experience in the industry and, chiefly, the importance of knowing your client.

“If you know the person, you’ll have a much better understanding of what they really require and can offer them your tailor-made help as a professional service provider,” he says. “Banking, custody, education – it doesn’t matter. To be successful, you should know who your clients are and what they care about.”

Ostwald clearly puts in the time to find out. From his start in the banking industry he has been exposed to unfamiliar situations and quickly adjusted. His entrance into the securities services industry began at the end of his apprenticeship as a bank clerk with Deutsche Bank in Hamburg in 2000 when he moved to the bank’s Frankfurt headquarters as a trainee. It was a field he was unfamiliar with.

“It sounds good, but what is it all about?” he recalls saying. “Global custody. Not one time had I heard the word custody in two years of apprenticeship. But honestly, it’s quite a funny start because I really had no idea what these guys were doing.”

In 2004, Ostwald started as the assistant vice president for sales and relationship management for custody at BHF-BANK. The German provider had not offered its services outside of its market for nine years. Getting the custody ball rolling for BHFBANK again was one of his biggest accomplishments, but also one of the major challenges of his career.

“At that time, there were no marketing, no sales and even no relationship teams,” Ostwald says. “We had the operations, the knowledge and the passion to build on – that was driving us, but from there on it was quite a bumpy road. I remember … in late 2004, we were just starting our first sales efforts when I called some of the well-known network managers in New York City, and they said ‘Who are you calling from? BH-what?’ Not that many people knew BHF-BANK, and we had the opportunity to start at level zero and rebuilding the trust and confidence the bank enjoyed in the ’90s.”

Among his many roles with BHF-BANK was launching a corporate custody blog that he is particularly proud of accomplishing. Commonplace now, it was one of the earliest forays by a custodian into social media (see “Blogging the back office,” Global Custodian, Fall 2006).

“Compared to other industries, banks used to be even more conservative at that time. I remember the discussion with my CEO about whether we should launch it or not, and I explained the potential pros and cons. But picture that: A twenty-something sitting together with the CEO of one of Germany’s most prestigious and conservative banks talking about launching a Weblog!”

The CEO then asked how they could control that medium. Ostwald responded that not only would control be relinquished, “but [BHF-BANK] should allow even negative comments in order to gain authenticity and trust.”

Ostwald eventually became the vice president and head of the global sales management department as the company gained more and more recognition and clients. It then received the attention of the world’s most acquisitive global custodian and was acquired by BNY Mellon in spring 2010.

In his career with BHF-BANK Moritz says that he learned that it all starts with an idea, as long as that idea transcends what people need. It is a concept that can be applied in any industry, he says.

“You can have an excellent product, but if you’re really not interested in how your client might benefit from it you just won’t be successful in the long run,” Ostwald says. “On the opposite side you might have just started a company or product as we did at BHF, but if you have the right focus on your clients’ needs and work closely together with them and are really passionate to go the extra mile then that’s a measurement for trust. And if people are trusting you, that’s what ultimately makes you successful.”