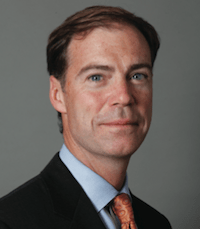 The legend of Michael Jordan being cut from his high school basketball team holds the lesson that despite initial obstacles, those who work hard to succeed can still rise to the top of their profession. While J.P. Muir may not be in the NBA Hall of Fame like Jordan, basketball turned out to be the gateway for his rise from a waiter to managing director at BNP Paribas Global Prime Brokerage, for which he has gained induction into Global Custodian’s Securities Services Hall of Fame.

After growing up in Kinnelon, New Jersey, a small town in the northwest part of the state, Muir attended Penn State University. In his senior year he ran for student body president and won by a landslide. “So I was coming out of Penn State feeling really good,” he says. “I was flying high, everything was great. I was looking forward to the next chapter of my life…and I couldn’t get a job.”

Muir knew that he wanted to get into financial services as he realized that, with hard work, the rewards could be more substantial than they could in any other field. Muir has always had a talent for communication, and in his profession he puts that skill to good use every day “to synthesize and truly understand the needs of the client,” he says.

After his 1991 graduation, Muir took on some temporary jobs, and during this time, he enjoyed playing basketball at a local park in New Jersey. Fortunately for him, he started playing against a Merrill Lynch employee who ended up being the connection he needed to get a position at the firm.

In his first two years at Merrill Lynch, Muir dedicated himself to his work every day, taking off just two Saturdays during those early years. “For a guy coming out of state school, that’s how I figured I’d roll up my sleeves and just work harder than anyone else,” he says. “I’ve got people around me that are so brilliant, and I need to work extra hard to contribute my part.”

From Merrill Lynch, he went to DLJ where he entered the prime brokerage sector in 1995. A few years later, Rob Davis, the founder of Hedge Funds Care (a charity aimed at preventing and treating child abuse, for which Muir sits on the National Board of Directors), recruited him to go to Bank of America. Then in 2001, Muir was recruited by the Father of Prime Brokerage, Lou Ricciardelli, and moved to Deutsche Bank, which he describes as a very exciting time. “Jim Rowen and Jon Hitchon were visionaries in terms of creating a new cross-margining value proposition, and that business grew tremendously,” he says.

But then in 2005, “as people went in different directions” from Deutsche Bank, Muir decided to pursue an entrepreneurial path and invested in a new prime brokerage firm, Merlin Securities (which was recently bought by Wells Fargo). The following year, Chris Innes at Bank of America recruited him back to the firm, and in 2008, Muir helped lead the sale of Bank of America’s prime brokerage group to BNP Paribas, where he has been for the last five years.

While Jordan used his Hall of Fame induction speech to try to one-up old grudges, Muir is quick to defer the praise to those around him. “I’ve been very blessed to have been connected with such talented people– those I worked for, with and alongside…I am very grateful.”