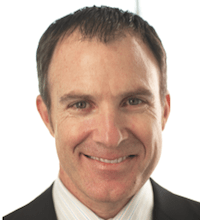 With two degrees from Georgetown (B.A. ’88 and J.D. ’93) and a promising career as a share broker at Wertheim Schroder, Jack McDonald put his professional life on hold to set sail with his wife for two years down the coast of the Atlantic, through the Panama Canal and all the way out to New Zealand.

The sabbatical “honed my skills for calculating risk-taking,” says McDonald, along with giving him the courage and confidence to follow his dreams. “A lot of our friends and family questioned our decision to pick up and leave successful careers as young professionals to go sailing across the ocean for two years.”

And while “the more risk-averse mode would have been to do that in your retirement years,” he was able to successfully live out one of his dreams before settling down, having kids and advancing in his career—all of which he has been able to accomplish since.

Following the two-year journey, McDonald and his wife moved to San Francisco in 2000 where they started their family. While there were a few changes to get used to—cell phones had become ubiquitous during his time away, he says—McDonald quickly became a managing director at UBS, responsible for the firm’s institutional equity business in the Western region.

Then, in 2005, he made the move to Conifer. “I had been talking to one of the founders of the firm, who at the time was CEO and is now our chairman, Phil Stapleton. He was looking to bring on a partner for transitional purposes, and eventually we reached an agreement where I would shadow him for two years and then take over at the end of 2008, which is exactly what happened,” says McDonald. “Perfect time to jump into managing a financial services firm,” he jokes.

But even though the financial crisis presented all sorts of challenges, perhaps 2008 really was the right time for someone like McDonald, armed with the confidence and risk calculation ability gained from his sailing years, to take the helm.

“Ultimately I can look back and say that [managing during the crisis] really taught me more than managing a successful firm in a bull market ever could have. It forces you to make difficult decisions and take a longer-term view,” he says.

When McDonald stepped in, he structurally changed the firm by switching from a completely bundled service offering to an unbundled one and “approached the market more from an à la carte perspective,” he says. Plus, Conifer divested their compliance and their outsourced-CFO businesses in order to focus on their fund administration and broker-dealer offerings. “These moves shaped how we now invest our resources, in terms of building new applications for both businesses,” says McDonald.

In addition to having the vision to offer clients unbundled services, which provides greater transparency and control in the face of new client and regulatory demands, McDonald also knew that, post-crisis, there would be greater demand for clearer reporting.

“Our view was that in order to scale the business and increase value to our clients and our clients’ investors, we needed to have a better reporting portal. This led us to build Conifer iCon, a cloud-based data warehouse and performance reporting dashboard that has proven very successful for us,” he says.