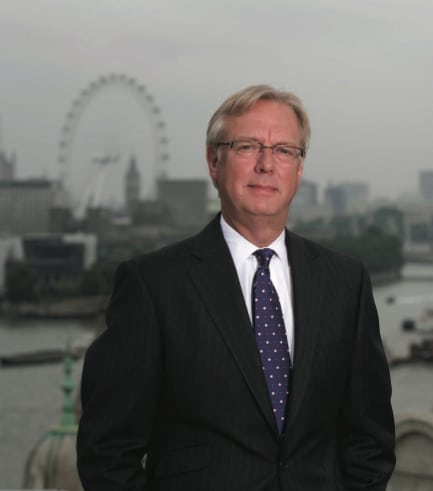 Conrad Kozak is that rare animal in modern finance: a man who has only ever worked for one bank. The ownership of the bank may have changed, but he has never gone anywhere else.

Kozak joined Chemical Bank in London in 1978 straight out of university. Thirty years on, the fact that he is now head of securities services at J. P. Morgan effectively means that he is still working at Chemical Bank. After all, Chemical bought Manufacturers Hanover in 1992, and then Chase in 1996, which was merged with J.P Morgan in 2000.

But then Conrad Kozak is-despite the Eastern European surname-a Yorkshireman, and so a member of a stereotypically stubborn breed of Englishmen. Born and raised in Huddersfield, a gritty industrial conurbation in the West Riding best known as the birthplace of rugby league and the much-derided British Prime Minister Harold Wilson, Kozak retains his links with the town. He even follows, from across the Atlantic, the weekly fortunes of Huddersfield Town, a team now languishing in the third tier of the English football league. Like most football clubs, Kozak says, Huddersfield Town never fails to lead its supporters to the brink of glory before letting them down at the last minute.

It sounds well-suited to the temperament of Conrad Kozak, who is certainly not the irritatingly posh and reticent English banker of American caricature. He went to Huddersfield New College, then the local grammar school but now a sixth form college, before winning a place at Bristol University to read medicine. A taste for the good life proved incompatible with the demands of the course, and Kozak ended up graduating in politics and philosophy. This combination of upbringing, assurance and self-knowledge perhaps explains how Kozak has survived and thrived in a commercial culture which most Englishmen find rebarbative.

Certainly he has stayed impressively loyal to it, never straying far from operations, let alone American banks. His first job was in the back office of the Chemical Bank in the Strand, where the tough departmental chief Tony Herriot made little secret of his skeptical views about the value of graduate trainees. But it was obviously a good school for operational leaders of the future. A fellow graduate recruit was Martin Lewis, who is now COO of Legal & General.

“In those days, Chemical was a big New York regional bank with a massive foreign exchange machine attached, which was based in London,” Kozak recalls. The bank had some corporate lending products as well and it was, in a roundabout way, exposure to trade finance that gave Kozak his first opportunity to move to New York. “Our letter of credit business was in awful shape,” Kozak says. “It was run in a very old-fashioned way. The guy in New York who was responsible for it globally asked Tony Herriot if he had anybody who might be able to do what we would now call product management. It was decided I would be better off in the corporate bank, actually selling the stuff.”

As a result, he spent a year touring the English Midlands and Scotland touting trade finance products to local industrial and commercial companies. Understandably, boredom soon set in, so Kozak jumped on an offer from Tony Herriot to manage the establishment of remote servicing centers for funds transfer around the world.

Between 1981 and 1983 Kozak was responsible for the establishment of what were called “online service centers” in London, Frankfurt, Milan, Paris, Tokyo, Zurich-and Cairo. “Online meant we were online,” Kozak says. “SWIFT was not yet widely adopted, and we had a lot of correspondent banking clients sending telexes to New York. For them, it was rather like sending a telex to nowhere. So we set up a service to pick up paper instructions locally, and key them in to our systems. Clients liked it, because they could speak to someone locally in their own language.”

He spent a frustrating three months in Egypt-where the biggest challenge was clearing the equipment he needed through customs without paying a suitable emolument to customs officials-but his management of the project was impressive enough for Chemical to bring him in 1983 to its head office in New York as the manager of the entire global funds transfer network. Although he did have a second spell in London, running the international sales force of the financial services division between 1987 and 1989, Kozak has stayed in New York more or less ever since. He returned there as chief administrative officer of the financial services division, running centralized data processing, finance and human resources. “Part of the responsibility of my new boss, John Rounds, was custody and trust, and I was always complaining to him how inept the custody and trust people were,” Kozak explains. “One day, he got so fed up with it, that he lost his temper with me and said, ‘Well, if you are so ******* brilliant, why don’t you fix it?'” The result was a new job in the custody and trust division, as head of product management and sales in global custody, initially reporting to Jerry O’Leary. But Darcy Leclair, the Canadian who originally ran the corporate trust business, soon took charge of both the custody and trust businesses, and by the time Chemical acquired Chase in 1996 Kozak was reporting to him as head of product management for the entire securities services business.

Unfortunately, custody was the one field where Chase had a larger franchise than Chemical, and the custody clients of Chemical found themselves being transitioned on to the Chase global custody platform. However, the broker-dealing clearing and corporate trust businesses were not initially merged into the larger custody group, and Kozak stayed where he was.

The upside of standing still was the opportunity to work closely with Mike Clark, the ex-Bankers Trust executive who then headed the Chase corporate trust business and was the main architect of its subsequent and successful expansion into servicing asset-backed and structured securities. The two men hit it off, and Clark came to rely on Kozak. One of the less agreeable tasks Clark asked him to do was to re-shape the tri-party securities financing arm of the broker-dealer clearing business in London, where creative products and surging revenues were more than offset by lack of discipline and an equally rapid rise in costs.

One positive aspect of the experience was the opportunity it created for fellow legend Liz Nolan, who Kozak brought from Merrill Lynch Securities Services as the new head of clearance and collateral management. On the other hand, the corporate trust side of the business went so well that Clark agreed in 2003 to buy the corporate trust business of Bank One. The deal was just closing in January 2004 when the J.P. Morgan Chase merger with the whole of Bank One was announced. That merger brought with it the Bank One CFO Heidi Miller, who became head of the newly formed Treasury and Securities Services division of the merged banks.

It was Miller who appointed Clark to succeed Tom Swayne as head of the custody business-what is now called J.P. Morgan Worldwide Securities Services (WSS)-in January 2005. His admirable lack of sentimentality in agreeing to swap the $2 billion corporate trust business he had done so much to create for the Bank of New York retail branch network finally created the opportunity to merge the old Chemical broker-dealer clearing business into WSS. The divide which had separated Kozak from the custody division at the time of the Chemical deal way back in 1996 was finally healed. And when Clark decided in late 2007 to take up a new post as head of institutional services at Fidelity, Kozak found himself-as head of global custody and fund administration-ideally placed to succeed his mentor.

As head of the securities services businesses, he now reports directly to Heidi Miller. But no less than 12,000 people report to him. That would be a near-capacity crowd at Huddersfield Town.