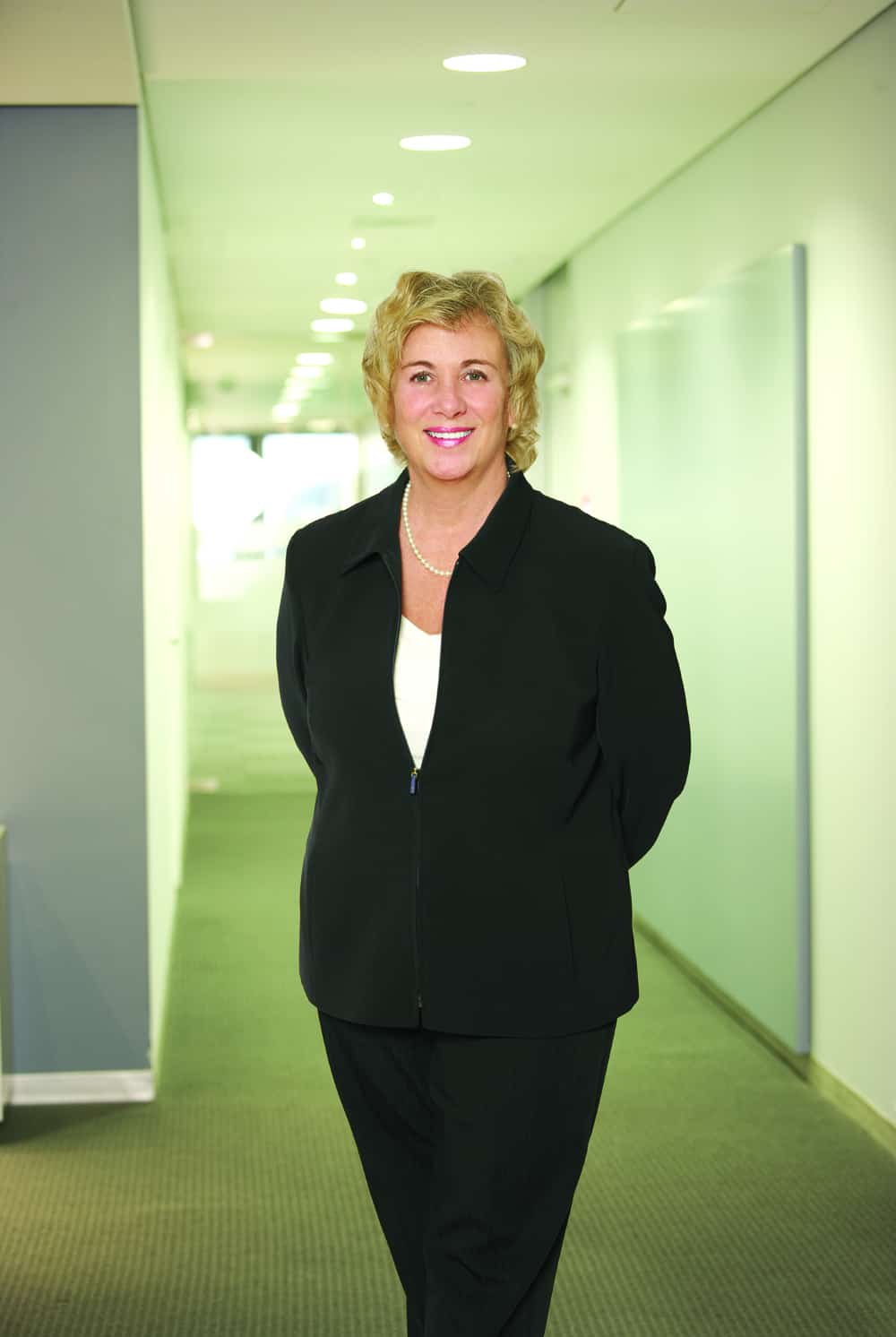 In the late-1990s the sub-custody group at RBC ran an advertising campaign that featured nothing but the hands of its global head of relationship management. “Every year at Sibos, three or four people always come up to me and say something about that advertisement,” says Pat Jack, who retired as director, Canadian custody and clearance, at RBC Dexia this January after 42 years with RBC. Pat is a tactile person, but that is not why people still remember the advertisement. They remember it because what it said about Pat is so obviously true of her: She is indeed “programmed with the personal touch” to relationship management. One measure of what that personal touch earned Pat was the special tributes paid to her by José Placido and Stephen Lomas at the annual RBC dinner at Sibos in Boston on September 30 last year and again at her leaving party in Toronto. Another was the enormous volume of letters and cards and e-mails and telephone calls that Pat has fielded since news of her retirement filtered out. What the personal touch of Pat Jack earned for RBC is immeasurable. The fact that RBC maintained a top rating in Canada for 17 straight years in the Global Custodian agent bank survey owed much to the unique ability of Pat Jack to generate goodwill. Toward the end of her time, when the expectations of clients were higher than ever, that fund was still suffi- ciently in credit to compensate for market infrastructural shortcomings back in Toronto. “Relationship management is excellent,” as a client of the bank put it in 2005. It was a huge personal disappointment to Pat that she and the team were unable, before she stepped down, to restore the top rating the bank narrowly lost in 2006.

Ironically, perhaps, nobody did more to rescue the Global Custodian agent bank survey from the desultory condition to which it was in danger of succumbing in the early years of the 21st century. Even the frankest conversations with Pat about what needed to be done were always tempered by the knowledge that she believed in the survey and wanted it to do justice to the magazine and the industry, as well as RBC. The Global Custodian survey process today is still far from perfect, but the revolution that has taken place in the quality of the process, the technology and the analysis over the last four years owes a great deal to the unsolicited energy Pat Jack brought to the task of helping us to reinvent the agent bank survey back in 2004. But then Pat brought an amazing energy to every business endeavor, from the Standards Council of Canada, through SWIFT committee meetings at La Hulpe, to being the last to go home when they shut the bar at our annual awards dinners in both London and New York. Even now, happily deprived of her daily commute to work, Pat is still up with the birds. “I am still waking up each day before 5:00 a.m., even without the alarm clock going off,” she says. Oprah Winfrey knows exactly where such energy derives from (“Passion is energy,” as the talk show queen once said), but many will still find it surprising that sub-custody can engage the passions of anybody at all. Such snobbery is to misunderstand the materiality of the industry. More importantly, it is to misunderstand the personality of Pat Jack, and the experiences which made her.

Pat is a member of what will probably be the last generation to make a successful career in banking without going to university. She started as a teenage teller in a 15-man branch of the Royal Bank of Canada in Vancouver in 1965, reporting to the savings supervisor. She took the job because it was near to her house, where she was responsible for raising three teenage siblings after the early death of her mother. As the oldest of a family of seven children, and a surrogate parent by her mid-20s, Pat Jack has never had the luxury of thinking any task was beneath her. She has held 27 different positions with RBC over the four decades since that branch job back in the mid-sixties. She has sold personal loans and mortgages to retail customers; managed the loans department of a bank branch; written marketing plans and lending rules for retail loans; authorized repossessions of motor cars and houses; project-managed an automated payroll system, and marketed it to corporate clients; and even had a spell in HR (“It was called ‘personnel’ in those days,” she recalls). Pat Jack did not even reach Toronto until November 1988, where she recruited and trained MBAs entering corporate banking at the head office training center. “I worked there for just under three years,” remembers Pat. “Then, the HR people said they had an interesting job I might like-to head up client service in what was then called the Toronto Securities Centre. I began there in March of 1992.” She was still there a year later when RBC bought the beleaguered Royal Trust, and the fi- nancial institutions group was formed to cater to custodian banks and brokerdealers active in the Canadian securities markets. A member of the executive committee, Pat Jack reported initially to the former Royal Trust executive David Dunlop, and later to José Placido, the current CEO of RBC Dexia.

“David, of course, was the individual who put our business on the map,” says Pat. “He had a love and a passion for the business and he really established our organization as a serious, global player. He was always open, willing to help and introduced me to numerous people in the industry. He was an absolutely brilliant mentor, and we had a very positive relationship.” Dunlop was the architect of the Toronto Dominion Bank and Scotiabank/ Montreal Trust custody acquisitions of 1996-97 that marked RBC out as a serious provider in the consolidating Canadian marketplace. “I was very involved with both of those deals,” says Pat. “The transactions certainly increased our market share in the area of sub-custody, and gave the organization much more profile in the market.” Under Placido, who succeeded Dunlop as head of the business in 2001, RBC has taken even bolder steps outside Canada. It acquired Perpetual Fund Services in Australia the year he took over, and agreed in 2005 a complex cross-border merger with Dexia in Europe. “Early on, José established himself as an exceptional leader who had a clear vision and aspiration for our business,” says Pat. “He was always very supportive of me and my industry affiliations and initiatives.” Although mergers are notoriously distracting, Pat had little difficulty persuading her sub-custody clients that the senior management was still interested in making them happy. “Throughout the entire process, our top priority was making sure that our clients were satisfied and being looked after,” she says. “As the sales figures and survey rankings would attest, we managed to do that very well. In a time when there are a lot of businesses exiting the custody business, the joint venture said to the marketplace that we are committed and we are here to stay.”

If that demonstrable commitment could not prevent RBC losing its coveted toprated status in the agent bank survey, it goes a long way toward explaining it: The merger was consummated the same year. Despite everything that has happened, RBC maintains a dominant share of the Canadian sub-custody market. Pat is disappointingly diplomatic on the local competition, though everybody knows the intensity of the rivalry with CIBC Mellon is unmatched, even by that between Clearstream and Euroclear. “There is certainly a keen sense of competition between the organizations,” she admits. “But it is the clients who benefit from that, through higher service standards and new products and services.” It is a measure of her graciousness that, despite investing two-thirds of her life in RBC, Pat Jack has never allowed the rivalry with CIBC Mellon to obsess or embitter her. But then how could it? Pat Jack is interested in people, not corporations. In that sense, paradoxically, RBC and Pat Jack are made for each other. True, even Pat Jack can make the corporate culture of the bank sound, well, pat. “The philosophy of client service excellence really drives everything that RBC Dexia does,” she says. “It is a mindset, it is a culture. Every strategy and decision is based around the client needs and expectations and trying to exceed them. There is the constant desire to try to be a step ahead and anticipate what our clients will need next.”

But then it is people like Pat Jack who can drain even the dreariest corporate muzak of its cynicism, precisely because she is genuinely interested in people. “Meeting new people, traveling around the world, learning about their cultures and the different characteristics of their various countries-it has been fun,” says Pat. “Of course, winning business matters. But wining new business after developing good, strong relationships, and then helping clients to grow and succeed, is best of all. I have really enjoyed the hundreds of people I have met and worked with over the years around the world. In fact, as I look back over the years, easily the most enjoyable aspect of the business has always been the personal relationships with clients and colleagues. The business has certainly changed, in that the clients are more sophisticated and their needs are much more complex. But one of the things that have not changed is the strong, solid relationships with the clients. The value of the friendships and relationships that develop over time is really quite special.” Pat Jack will not be lost to the business entirely- she admits that she is prepared to do some occasional contract work-but it is friends and family, especially back home in British Columbia, that will now enjoy more of her special human qualities. But I cannot help wondering how Pat will fare as a client. It is almost worth taking a job as a waiter or a barman, preferably in one of the warmer parts of the world that she plans to visit now, just to find out. –Dominic Hobson

This profile originally appeared in Global Custodian Spring 2008 as “Pat Jack: An Appreciation.”