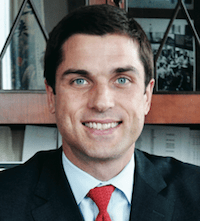 At 36 years old, not only is Thomas Farley the youngest ever Global Custodian Legend, but he is also the youngest chief operating officer of the largest exchange.

Farley assumed his latest role as COO of NYSE Euronext when IntercontinentalExchange Group (ICE) recently acquired the company for about $11 billion, creating by far the largest exchange, with a market capitalization of $23 billion.

Farley joined ICE in 2007 when the group acquired the New York Board of Trade, now known ICE Futures U.S., a major global futures exchange for soft commodities (such as sugar, coffee and cotton), equity index futures and currency futures (such as the U.S. Dollar Index). As president and COO he oversaw a many-fold increase in profits, the doubling of volumes and development of several new products at the U.S. futures exchange.

Farley’s most innovative contribution came in 2007 when he introduced a hybrid trading environment, which included electronic trading of futures and options for the first time. In 2008, ICE Futures U.S. became the exclusive home of the Russell suite of equity index futures. As the manager of ICE Clear U.S. (the clearinghouse for ICE Futures U.S.) and later as a board member, Farley navigated the clearinghouse through several turbulent market environments including the Lehman Brothers and MF Global bankruptcies.

In 2012, Farley was promoted to senior vice president of Financial Markets at ICE, where he oversaw developments in credit, forex and equity indices, and he also played an important role in ICE trading technology including ICE’s instant messaging service. In addition, Farley was asked to oversee ICE’s credit default swaps businesses.

It is in his latest role that Farley recast ICE’s businesses to be more customer-focused with a greater reliance on electronic trading-and-processing products, thereby improving the financial performance of the businesses, and he also launched several key initiatives: a credit index future contract in June of 2013, providing a new tool to manage credit risk; a swap execution facility, ICE Swap Trade, in October 2013; and ICE’s instant messaging functionality, ICE Chat, for complex negotiations in the trading world.

Through these experiences, Farley seems poised to be a key player in shaping ICE’s new role as the world’s largest exchange.