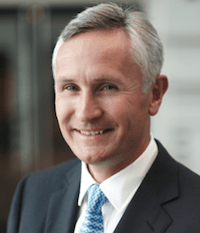 Before spreading messages through the SWIFT network across the world, Chris Church was already making waves globally as a professional sailor.

When Church turned 18, he moved from the U.K. to Cape Town, South Africa, and he joined the local yacht club to learn to sail and to make new friends. A few years later, he entered a race from Cape Town to Rio de Janeiro and spent the next decade as a globetrotting professional yacht racer.

“Sailing was a phenomenal way to, one, see the world,” says Church. It also helped him gain a multicultural view and “just realizing that there are so many different good ways of doing things. You’re not just locked into the English way of doing stuff or the American way of doing stuff or the South African way. Ocean races or long passages teach you a lot about yourself [and] how to work with others…as a team in a competitive environment.”

Church reached the pinnacle of yacht racing when he competed in the 1987 America’s Cup in Perth, Western Australia, but after this event, Church wanted a change of pace. At 28, he wanted to challenge himself further and prove himself in the business world. Sailing did facilitate him meeting his future wife after the 12 meter World Cup Championship in Perth, but he knew that in order to accomplish some of his other goals in life, such as starting a family with her, he would need to find a more stable career and less nomadic lifestyle.

At the time, a friend of his worked at Reuters. “And I couldn’t even spell the name of this company, let alone know what they did,” says Church. But his friend set him up with an entry-level sales position. When he told his new coworkers about his sailing career, they said, “Clearly you’re not very smart. Why’d you give that up to join Reuters?” he recalls. “And I think the answer to that is because I wanted a challenge.”

Sure enough, Church rose to the challenge, climbing the ladder to work in London heading sales for the international division, followed by his promotion to run Reuters America-Western region, based in San Francisco.

“It was a great experience. It was a time when San Francisco was buzzing as the dot-com boom was just raging. And it was just a very exciting place to be,” says Church.

While he was in San Francisco, Church felt it was again time for another challenge, and he wanted to be a part of the dot-com boom. But Tom Glocer at Reuters convinced him to stay and join Project Proton, an idea that turned into global network provider Radianz (which has since been acquired by BT).

So Church made the transition from working with Reuters globally to this new startup with just six people, “where you’re doing absolutely anything and everything, working all hours of the day and trying to create a business from scratch…a lot of hard work, really fun and really rewarding when we actually saw the business grow the way that it grew.”

After successfully building the business from the ground up, Church again felt the need for a new challenge. “When a challenge isn’t there, I find that I’m not as good as I could be,” he says.

In 2008, Lázaro Campos (then the CEO of SWIFT) presented Church with his next challenge—to join SWIFT’s executive team and bring about change and refocus the industry cooperative. Serving as chief executive in the Americas and global head of securities, Church has helped grow SWIFT’s presence in securities and in the Americas and build out a value-added services business to complement the core messaging franchise.

While his days of professionally sailing are behind him, Church still finds time to race throughout the year. “I love the competition, the team spirit, and it still reminds me of what you have to do to get people motivated,” he says.

Boats also give him the balance he needs to keep him going in the finance sector. On Thursday nights in the summer, he often goes sailing near his home in Connecticut. “I get out in the water, and on a clear summer evening I can see Manhattan. And all the stress and strain of work [melts]. You could be on another planet.”