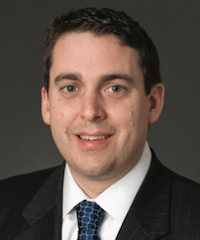 Throughout his life, Scott Carpenter has always had an entrepreneurial spirit.

“I knew fairly young that the business world was the place I wanted to be,” he says. “And I think the great appeal of it was knowing you could work with or lead a team to make strategic decisions that would produce significant results.”

After growing up in the suburbs of Boston, Carpenter stayed in the area to attend Babson College in Wellesley, Massachusetts. At Babson, he obtained his degree in entrepreneurial studies, “which makes it very interesting that I wound up at a 30,000-person organization,” he says.

But over the course of his 21 years at State Street, the company he has been with his entire career, Carpenter has found ways to put his degree to good use.

“Even though it does have the reputation of being a tried-and-true Boston custody bank, there have been many new business opportunities, acquisitions and geographic expansions where that entrepreneurial interest has been able to be applied,” he says.

During his career, Carpenter has been an integral part of State Street’s global expansion, including major acquisitions of other companies. After starting out in mutual fund accounting, he began helping with the firm’s M&A activity and later was involved in the transaction that led to the purchase of International Fund Services (IFS)—State Street’s “first formal foray into servicing alternatives,” he says.

Following the acquisition, Carpenter moved to New York in 2007 to become chief operating officer of the IFS division. It’s a time he speaks very highly of: “The pace of hedge fund administration—from the day-to-day collaboration of the service teams that produced a high quality product to the dynamic nature of the clients themselves and their new product developments—has been a fantastic experience,” he says. “Some of that pace and energy can probably be attributed to the buzz and creativity of New York, but some of it is just a byproduct of the industry irrespective of where you’re sitting.”

In addition to his time in New York, Carpenter has had stints working in Sydney, Luxembourg and Tokyo. Carpenter says that he was fortunate to have these international experiences because of work ethic lessons learned from some of his first supervisors, who still hold executive roles at State Street today. “They taught me early on to look for places where the company needed the most help and to raise my hand to get involved with those things, even if it meant relocating for a period of time. Overall, it has provided very solid perspective on conducting global business and has been a great set of experiences.”

For the past two and a half years, Carpenter has led relationship management and strategy for State Street’s alternatives group, where he helped lead the acquisition of the Goldman Sachs hedge fund services group. The deal vaulted State Street to the top spot for hedge fund assets under administration with over $750 billion as of September 2013, and Carpenter has a bright outlook for the firm’s continued growth.

While many in the industry see the short-term future as a challenge due to regulatory changes, the entrepreneur in Carpenter sees a silver lining: “I think it’s a real positive time of change. Even though the magnitude of change in the industry today is difficult to get through, on balance it should be a net positive for the industry. The higher standards for transparency and risk management being imposed by investors and regulators alike will only accelerate investors’ willingness to allocate capital to alternatives, and that growth will be good for all market participants. It also creates opportunities for service providers like us to bring new innovative products to market to help with these challenges.”