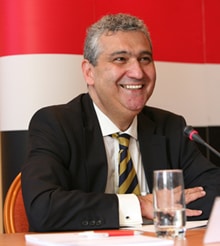 Ramy Bourgi played several public roles. His last was head of emerging market development at Societe Generale Securities Services, and there was an interlude at Cambridge Place Investment Management, but it was as successor to Jumbo Jewitt as head of the European and Middle Eastern securities services businesses of JPMorgan Chase that I first got to know this fascinating and lovable man. Of Lebanese extraction, Ramy Bourgi was actually raised in Africa, where his father lost a successful haulage business to the vagaries of post-colonial politics. If that experience made him sanguine (perhaps too sanguine) about the ups and downs of corporate life, it also endowed him with a certain resourcefulness. Ramy understood far better than his nominal superiors how success or failure in a large bank made larger by successive acquisitions, particularly at the upper levels, owes more to luck than judgment – and made less effort than most of his contemporaries to increase his luck by passing more time with colleagues than with clients.

A natural charm and easy way with people could not entirely conceal the fact that Ramy was a man of unusually high intelligence and impressive learning for a custodian banker (few people knew his professional background was not in the back office at all, but in asset management, with the Crown Agents and Chemical Bank). But what was quite impossible to mistake was his integrity. Ramy had an instinctive sense of who was true, and who was false, as anyone who was ever interviewed by him, let alone worked for him, would know. His courage in the face of corporate politics commanded an unusual degree of loyalty, even unto dismissal, from those who worked for him. Courage, integrity and loyalty are not qualities highly prized in the investment banking industry, but they were the secret of his sustained success in the Middle East.

If it was shocking to learn that Ramy had died, it was no surprise at all to learn that he had died in Abu Dhabi, where he had negotiated an innovative joint venture with the National Bank of Abu Dhabi for his last employer. It was his deep knowledge of the Middle East, and intuitive understanding of how to do business there, that built the still-powerful Chase global custody franchise in the region. Bankers of the PowerPoint school of business development consistently underestimated the value to the organization of the premium he placed on personal relationships. It was entirely characteristic, when I saw Ramy for the first time in a couple of years, that he noticed I had lost weight – a fact which had until then escaped even my notice – and could remember the name of my oldest son.

It was in these ways that, fancifully or not, Ramy offered me a tantalizing glimpse of the Levant, the vanished commercial civilization that dominated the eastern Mediterranean from the 17th century to the 19th. Like the Levantines of old, his belief in free trade and love of deal-making owed nothing to any theory or system of belief. They were intrinsic to his being. His love of cities, his detachment from the bigotries of nation and confession, and above all his intense devotion to his two children, spoke of a man who would rather lose everything than kill for a distant cause, but make any sacrifice and endure any hardship before acceding to the breakup of a family. Nothing pained Ramy more than the end of his first marriage, and no man tried harder to prevent it. Even his enthusiasm for rugby football owed most to his urgent sense of closeness to his son.

Indeed, it was by the naturalness of these passions that Ramy brought to life not just the Beirut of the golden age, but the very scents of Smyrna and Alexandria before it. Not the least of the pities his friends now know is that he departs just as the younger generations of the Middle East and North Africa may be poised to rediscover the lost wisdom of the Levant: deals before ideals, trade before politics, city before state and family before all. That happier and richer future could be glimpsed in Ramy, and not least in his determination to keep his ethnic and religious background deliberately vague. But the best measure of the goodness of this man, as well as its worst, was a devotion to family so intense that he passed his career, and in the end his life, in an industry whose values could never claim his heart, and which was undeserving of what he brought to it.

Though it is rightly said that every death is the death of a child, we can console ourselves with the thought that the universe will some day and in some place make good its promises to Ramy Bourgi. It makes bearable what is most irksome of all about his death: that he was not granted the time to do what he would have done so well. That is to teach young people, and through teaching not only encourage and inspire them, but help a new generation understand why in the end the claim of the fanatic and the despotic is not tragic at all, but merely comic.

I have lost a friend. But for the industry, which knows little of friendship, what was extinguished in April this year was its conscience incarnate.

Ramy Bourgi passed away in April 2011. This is a personal appreciation by Global Custodian Editor-in-Chief Dominic Hobson.