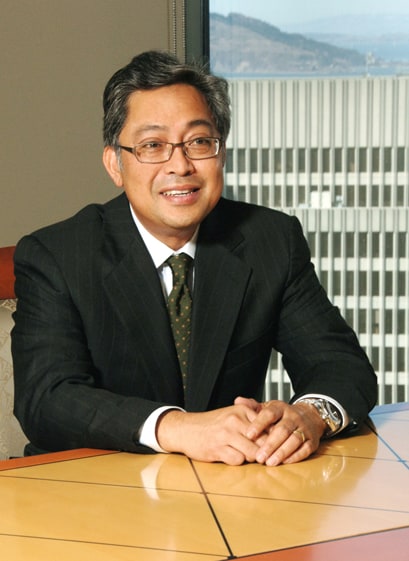 “You need to be affable, available and able in order for people to understand you, to gravitate toward you,” says Bo Abesamis, senior vice president and manager of the Master Trust, Global Custody and Securities Lending Group at Callan Associates. Clearly Abesamis has mastered that “triple-A” approach to doing business. Having held a number of different roles at Callan since he joined the firm in 1987 (“I’m very thankful that I’ve been cross-trained in all the disciplines within Callan,” he says), he is certainly able. He loves when people “seek [his] counsel and guidance,” so no doubt he is available. Without a doubt, though, it is his affability that dominates Abesamis’ reputation. With nary a frown, and invariably a wisecrack on the tip of his tongue, Abesamis is one of the industry’s most approachable Legends.

Originally from the Philippines, Abesamis attended the Ateneo de Manila and earned his bachelor’s degree with a focus on accounting and finance. In 1984, he enrolled in the University of San Francisco, where he earned a double MBA in finance and international business-all the while fixing fax machines and copiers at the university to cover the cost of his tuition.

Given the finance track, one would think it was a formulated scheme to join the securities business. Not so, he says. It wasn’t until his final semester at San Francisco when he learned about financial futures, financial engineering and portfolio management that he gained an enthusiasm for investment banking (his plan had always been to work for a multinational company). “I didn’t know that what I’d learn would be in the investment field in the esoteric world of custody and securities lending, the most primordial stuff we take for granted but is key to everything,” he says. The decision was simple: “It really peaked my interest. Callan had an opening. I said, ‘Why not?'” He has been at the firm ever since.

What he loves about his job is that he gets to “see both sides of the equation: the plan sponsor, the buyer and the vendors, the industry practitioners, the sellers of their wares. It’s like you are this funnel of information, and somebody who’s not cross-trained in a lot of disciplines and doesn’t know fiduciary responsibility would bumble through that information. That’s what I love about my role, to hear out both sides, collaborate with them. That’s the most fruitful thing, and that was proven during the crisis. You’re really the beacon of sanity. You realize the unbelievable amount of respect entrusted to you by the industry on both sides.”

At the tail end of the financial crisis, says Abesamis, the industry is experiencing a metamorphosis. “More than ever, they will be pushed to exercise good judgment and apply risk management discipline that is unheard of,” he says. “I think that pressure would give them some level of what areas to focus on: hiring the right people, and enhancing their product sets.”

Abesamis says the highlight of his career, as well as the low point, has resulted from the financial crisis. The crisis created a greater demand for services such as those offered by Callan, a consultant to institutional investors. But while it was heartening to offer palpable help to investors through the crisis, Abesamis says, he wishes he could have done more. Discussing it is the only time his cheery demeanor perceptibly wanes, if only briefly.

“The industry, the plan sponsors, the institutional investors-they acknowledged what unbelievable consulting they received [from Callan throughout the crisis],” he says. “It was the low point, also, of my career. I wish I could have called it and prepared everybody. I wish I could have been the prophet. But I know I am human. I don’t hover on water.”

The crisis had one other lasting effect, he adds with a typical Abesamis quip: “A year and a half ago I had black hair. Now it is white!”-Christopher Gohlke