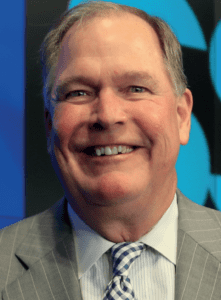 Could you give us a background of the business and how the success of the fund administration side came to fruition?

I founded this company in 1986 and we were primarily a financial technology player. We had built software and bought a few companies around 1999- 2003, including Total Return, which was a hedge fund accounting system and AdvisorWare, which was owned by HedgeWare.

We had a lot of hedge funds as clients for software, but we realised in 2002 that, wow, we’re selling software at $50,000 a year and these guys are building businesses making hundreds of thousands. So why don’t we try that?

We weren’t intimidated by the accounting and reporting processes because we were pretty familiar with it and had built our own software. What really happened was, this became an accounting and systems business.

Fund administration used to be mainly finance, prime brokerage and all kinds of other things that commercial and investment banks would supply to these hedge funds. Often, they wouldn’t have alternatives to other funding sources or other ways to execute their strategies.

We continued to grow, made more acquisitions – purchasing the likes of CACEIS’ and Wells Fargo’s fund administration businesses, Citi’s Alternative Investor Services business, and GlobeOP – and got to the trillion-dollar club around 2016. We still make acquisitions, but obviously, a lot of people figured out that SS&C has a pretty good model, so others have been getting into this acquisition game.

We still look and make some bids, but we’re a very disciplined company. We ensure our clients know we will be here; we’re very profitable and use technology to extend our gains.

An awful lot of the platforms in hedge funds use SS&C as their fund administrator because they know they can scale. Some of our clients might do 1-2 million trades a day. Not many fund administrators can handle that.

Hedge fund managers like to know we’re accountants and systems people and spend tons of money on cybersecurity. We probably spend $500 million yearly on R&D. We have about 20,000 clients who manage around $45 trillion, so there are not many asset classes or parts of the globe we don’t touch.

We’re large scale, with about 27,000 people and offices in 40 countries, with an awful lot of talent and capability, but also patience. We have the discipline to walk away. We can still buy and can afford it and outspend anybody and I would think we’re somewhat by far the most profitable fund administrator. It’s because our people, processes and technologies are better. And when they’re better, you really don’t have to think about it that long, you do it.

Was there a particular point that you recognised technology could be a real differentiator in the industry?

In 1986, the world was getting a little too complex for pencil and pad, so we had to get away from working column worksheets. People were coming out with things like Lotus 123, and then obviously Microsoft took over with Excel as far as the spreadsheet game was concerned.

But I’m an old auditor, so controls and change controls and being able to audit the spreadsheet, who built what macro and how well documented it is, and if somebody leaves, who’s going be able to pick that multi macro spreadsheet up with hidden cells and formulas.

That becomes pretty risky for people who want to trade every day and understand their positions and values. I thought technology was going to be the next big wave.

The IBM PC came out in 1981, and I started this in 1986. You started getting a Pentium chip in about 1988. Then pretty soon, you had PCs that were as powerful as the mid-range and in the low-end of the mainframes, and within another few years, it’s as powerful as mainframes work. You’re not talking about counting raindrops here. Even if it’s a million or two million trades, if you’re doing a million instructions per second, it shouldn’t take that long.

That’s why the supercomputers and low latency, algorithmic trading and related processes you see in the market today are all computer driven – it’s not even having humans deciding yay or nay. The computer decides yay or nay. The humans set up what the parameters are, but the computers execute.

What does the modern day client want and expect from their fund administrator?

I think it’s more to do with the management of complexity. So take, for example, a long/ short equity hedge fund, which was the genesis of hedge funds. Well, as they got bigger, the equity markets shrunk. There are about 10,000 fewer public companies than there were 10-15 years ago.

They went into other markets, like private markets, private equity, private debt, distressed debt, real estate, or other asset classes, where they thought they could get better returns. But those are different asset classes with varying information and risk requirements.

Therefore it becomes more complex, and it also requires more people. These are large, complex organisations and you being a great stock picker or great shorter is only one segment of your responsibilities – so you are leaning harder on the fund administrator.

Madoff happened 14 years ago and really shone a bright light that you want to have people independent of the fund being the ones sending out your statements, calculating your NAV, auditing your marks, and your values placed on the different positions you have.

Now there is a way better system of internal control, with separation of duties and being able to get you the information you want, when you want it and how you want it. You also have confidence it’s correct, accurate and up to date. Stale prices and stale positions are a death knell for an actively managed portfolio.

How is SS&C approaching its longevity as a leading fund administrator?

Staying on top of things means talking to your clients, prospects, employees, recruits and competitors. The focus is on really understanding the whole market, being willing to ask questions, and not being intimidated when you hear something and don’t know what it is.

You need to understand and ask what the objective of the strategy is. Then, have the purveyor explain the risk and rewards to you and the high and the low watermark. You can make a lot of money if you go out to Las Vegas and put it on red, as long as it turns up red. It’s the opposite if it turns up black – so you have to ensure that returns are not made with outside risks.

That’s why some of the asset classes that people get into, they have to be circumspect.