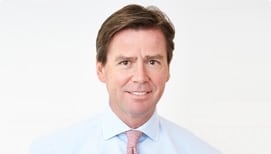 Jack Inglis, CEO of AIMA and Affiliate Board Chair of HFC UK

What does it mean to you personally to be appointed the UK Affiliate Board Chair for HFC?

This year, the Alternative Investment Management Association (AIMA) is celebrating its 30th anniversary and I am using both that and my new position as the Chair to increase the fundraising profile of HFC, leveraging AIMA particularly around the gala dinner where all funds raised are in aid of HFC.

I feel very honoured to be asked to take up the role. Having been involved in the hedge fund community for almost exactly 30 years, the fit is a really good one. I have had a long professional career, and when you get to a certain point you start to think should I give something back, so the timing was perfect for me. In a world where we are looking for more purpose in the things we do, it married up perfectly with my way of thinking.

I have known Gunner (Bukhart) for a number of years, and have been involved with the charity with some time in various things, both in activities undertaken by myself and attending their events. It is hard to not get affected by the sheer number of children that are being abused or neglected, and it was because of that which made me sit up and take notice.

How have you previously been involved with the charity? Was there any event that was particularly challenging?

I have been involved in the various fundraising efforts that had been done through events and raising sponsorship through their network.

The hardest event I took part in was in 2016 when I was asked to take part in the annual cycle ride at Monte Ventoux in France. Without thinking I said yes but did not own a bicycle at the time. It was then one of the most iconic hill climbs in world cycle that involved not one but three climbs in one day. It was quite sobering going up one of the ascents, you go past a memorial to former English rider Tommy Simpson who was the only person to die in the Tour de France going uphill. I shared a lot of sweat and energy doing that, and the satisfaction of completing it and raising a lot of money made it worth it.

Do you have any goals set out for the charity going forward?

The immediate goal is to enforce this sense of a community charity. When it was first born, HFC stood for ‘hedge funds care’. I want to emphasise that from my own network and the AIMA community to draw in more members, to expand the awareness of HFC, and that the charity that is rooted in the alternatives industry. Therefore we are aiming to get more involved, whether through volunteer level, fundraising, donations, or attending our events. I think we have a great opportunity to double awareness of the work being done, and encourage the hedge fund community to take a closer look and become more involved. I want to use this year as AIMA 30th anniversary to leverage both for the common good.

I am looking forward to having a director involved in the grantee charities – someone that has that direct experience with where the money is going, and seeing the difference we are making, will multiply the level of satisfaction by many fold.

According to the most recent report on child abuse cases from 2018, there were 80,000 child sexual offenses reported by police. That is extraordinary and gives you a sense of the magnitude of the problem. Our charity gives grants to other charities we think will make a difference. It is a part of the success of HFC – we use academics that specialise in social work, and they not only help us select and carry out the due diligence in grant making, but make sure what we give makes measurable results. I think we have a good process in place to ensure we get results.

How can the charity further engage with the hedge fund community?

What I really want to see is more managers getting involved with us. We need to get out more with our board and other volunteers to the management community. Service providers have been fantastic to what they have done for the charity through sponsorship and participation, but I think there is a chance for broader participation from the community. With the lines of hedge funds getting less defined with investing in private equity, I think we can also broaden out this community.

It is a global charity, leveraging the connectivity that goes on so well in the US chapters, particularly our HQ in New York, so we can continue our work internationally.