In 2002 film My Big Fat Greek Wedding (stay with me here), the father character insists on explaining the Greek etymology of every word in the world—even those that have little to do with the Mediterranean continent. “Kimono”, for example, comes from “himona”, which means “winter” etc etc ad nauseum. I feel like this month, I’ve been stuck in a constant social media conversation with individuals of the same mindset when it comes to settlement infrastructure and blockchain.

Rather than engage in a stream of responses back-and-forth, including some hair pulling and face-palming, I thought I’d blog about it. 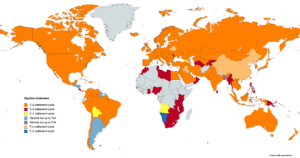 Now, as you may have heard on our recent FinReg podcast, the two-day settlement cycle first came into place in Europe as a result of the first wave of the Central Securities Depositories Regulation (CSDR). The innovation and front-office crowds may have paid scant attention to this at the time, but believe me, the middle- and back-office teams were busy preparing for the removal of one day from the cycle back in 2014. I sat through numerous meetings of working groups and roundtable discussions about the preparations for the two-year period between 2012 (when CSDR was initially published) and 2014 (the deadline for the move).

Although it was a well-executed move on the part of the industry, it wasn’t an entirely painless one. Market practice changes to accommodate industry-level events are rarely painless—they involve months of planning, testing and re-testing—just look at the Australian market’s ongoing delays to the CHESS system launch for proof.

The US market, in turn, decided that rather than look like a laggard, it would also move to T+2 in concert with Europe. This ensured that transatlantic clearing and settlement processes were in sync and, to be frank, the DTCC had been pushing for the move for some time and rightly capitalised on the peer pressure.

The move to T+2 wasn’t done without considering shorter alternatives. As you can see from the Firebrand Research map, some markets are on shorter settlement cycles such as China and certain Middle Eastern markets. However, the decision was taken for rational reasons—a move to T+1 would require much more investment and market practice changes to an area the industry doesn’t ever want to spend money on.

The biggest problem here isn’t the CSDs. It isn’t about the technology that underlies these infrastructures (though that definitely could do with an upgrade or two). You don’t need a distributed ledger system to support T+1 or T+0—the markets that support these cycles today certainly don’t. The problem is the market practices around liquidity and risk management, lending activities, netting etc.

If we’re going to make a wholesale change, we’re going to have to invest in middle- and back-office changes of a magnitude that would make most CTOs quake. I spend my days researching these areas—in fact, I’ve spent decades talking about these topics. Why do we have so many mainframes in the back-office? Why do we have risk systems that can’t cope with real-time support? The short answer here is it’s painful and difficult to replace these systems. Capital markets firms rarely want to invest in things just because they’re good for the industry. Plus the project risk is high, and I mean really high. Some of these systems look like the leaning Tower of Pisa, they’ve had so much built on them over the years.

To all you crypto people out there, yes Bitcoin, Dogecoin, and every other cryptocurrency the likes of Elon Musk pumps investment into works in a different way, but it hasn’t had to deal with this legacy problem. Seriously, if another person makes reference to everything in crypto being instant and 24/7 like I don’t already know that, I’ll scream.

I certainly don’t want to discourage technologists from thinking about this realm—please, we need change to happen. But you have to look at things from an entirely practical perspective. Don’t be the dad from My Big Fat Greek Wedding.